And the following cyberpunk set-up crafted in KDE Plasma, which I came across on Reddit this weekend, syncs tightly with my brief, doesn’t it?

Arguably the most striking feature of this neo-noir desktop in the video above is the vivid live wallpaper. Atmospheric, this instantly instills an edgy, futuristic vibe reminiscent of films like Blade Runner, Dark City, and eXistenZ.

I am even more impressed by easy it is to recreate the whole look (assuming you’re running KDE Plasma desktop) for yourself.

On a regular Ubuntu desktop with GNOME Shell setting up a live wallpaper requires some a bit of effort (installing an unmaintained app from a random repo or getting tricksy with mpv, fining the numbers and deftly placing enough hyphens).

On KDE Plasma, however, things are way easier; there’s no futzing around with a PPA or compiling a random project from Github. Instead, the live wallpaper is provided by a Plasma desktop plugin that anyone can install.

To install a video wallpaper plugin on the KDE Plasma desktop:

Once done, you can make any video file that gstreamer can play your desktop background — though naturally the effect will work better with some videos than others, i.e. a short looping clip vs a 3 hour movie.

The cyberpunk loop used in this particular set-up was downloaded from YouTube, but feel free to browse for and try out other video clips.

Note: Running a live wallpaper on a laptop is a great way to reduce your battery life.

But to install this futuristic facade in full you’ll need a few other things.

First install the Sweet KDE Plasma theme, and then add the Candy Icons. Both of these are on the KDE Store (meaning you can install them from within Plasma itself, no need to visit websites or download source code).

With everything downloaded, installed, and then set in the relevant places, you should be staring out at an evocative, electric, neon cityscape that you’re just a Daft Punk soundtrack away from living in.

Got a cool desktop you want to share with other readers? Let us know about it! 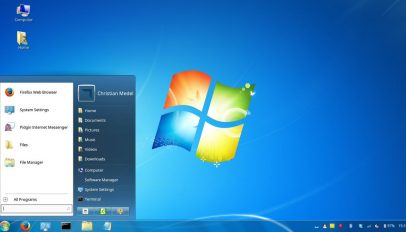 How to Make Linux Mint Look Like Windows 7
Read Next