The future of Ubuntu on the Raspberry Pi 4 is looking pretty fresh, with Canonical unveiling a new roadmap outlining official support.

October’s Ubuntu 19.10 release brought with it official version of the OS tailored for the majority of the Raspberry Pi family, including 32-bit builds for Rpasberry Pi 2, 3 and 4, and a 64-bit build for the latter.

But Canonical isn’t stopping there.

Raspberry Pi Ubuntu 18.04 LTS support is also planned for the near future. This will likely materialise around the time of the next point release/HWE update, which comes with the Linux 5.3 kernel.

Details on official Ubuntu support for the Raspberry Pi is welcome — just don’t get confused by what’s on offer here.

“Ubuntu support on the Raspberry Pi” does not refer to the all-singing, all-dancing desktop version that most of us are familiar with. That’s to say that Ubuntu is NOT positioning its desktop OS as a viable work environment for Pi bakers to toy with.

Instead, Ubuntu support on the Raspberry Pi relates to Ubuntu sans a GUI (aka Ubuntu Sever) and, in the very near future, the streamlined, stripped-back Ubuntu Core.

Of course, nothing stops you from installing a desktop environment atop Ubuntu Server, for which Canonical recommend using one of the xubuntu-, lubuntu- and kubuntu- desktop metapackages.

“The Raspberry Pi has established itself as a most accessible platform for innovators in the embedded space. Canonical is dedicated to empowering innovators with open-source software,” Canonical’s Galem Kayo says.

“Consequently, Canonical endeavors to offer full official support for all the boards in the Raspberry Pi family. Canonical will therefore enable both Ubuntu Server and Ubuntu Core for all the Pi boards.”

Giving the Raspberry Pi 4, the most powerful Raspberry Pi to date, an Ubuntu flavoured filling sounds like a recipe for success, giving developers, hardware tinkerers, and free software chefs all they need to cook up some seriously mouth watering treats.

If you own a Raspberry Pi, tell us which distro you run below!
Hardware News iot raspberry pi raspberry pi 4 Ubuntu 19.10 ubuntu core 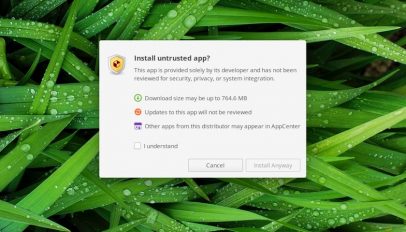 elementary OS Now Has Support for Flatpak Apps
Read Next