Welcome to another half-hearted instalment of my low-effort content strand where I tell you about things I saw on Twitter that, if we’re all 100% adult and honest about, you probably saw on Twitter too.

Although it’s proving difficult to stay on (Linux related) topic, this series has proven a great success in only 3 weeks — so much so that I’m planning to launch three separate spin-offs!

I mean, I might as well milk the franchise for all I can while the udders drip with goodwill, right?

Keep an eye out for “This Week My Spam Folder Taught Me“, “This Fortnight a Disqus Bot Taught Me” (spoiler: bit repetitive that one) and, to serve the overlooked people-who-read-this-site-whilst-diving niche, “This Month Diving Taught Me”.

I wouldn’t get your hopes up for the latter, though. I can’t swim, let alone dive…

Reader tips make up a fair whackof this blog’s content (because I’m lazy and I don’t pay attention).

So, naturally, when a reader mailed in to tell me that the world famous™ text editor Notepad++ was available as a Snap app, I rolled up my sleeves and duly smacked a few hundreds words out, all while telling myself: “It’s what the people want!”

Now, to be fair, most of the outrageously OTT outraged reactions this posy garnered on Twitter were clearly meant in jest (and they did put a grin on my face). But the reaction also flagged up (yet another) glaring deficiency in my coverage of apps: text editors.

It was nice to see the tweet (and the post in general) renew some love for Vim, and emacs, and VSCode, and Notepadqq, and a gallery of others — makes me think a roundup of the “best code editors for Linux” is needed?

I mean, surely that wouldn’t be as controversial, right? 😉

Do you use the Thunderbird email client full time? Hats off if you do because, I certainly don’t (I use Gmail in a browser tab).

But while I’m not part of the full-time Thunderbird flock I do enjoy checking out each new release of Thunderbird as and when one swoops in.

So I was particularly pleased to see the official Thunderbird Twitter account parrot word of an upcoming release:

Among other features we can look forward to in the Thunderbird 68 release (due “in the next couple of months”, apparently) are “goodies in composer” window and bunch of fixes contributed at the recent Thunderbird Bugday event.

Alex, aka BabyWogue, aka the world’s biggest Ubuntu fan, tweeted about an interesting quirk in the naming convention of the famous image editing app we all refer to as “GIMP”.

You know the GIMP, right? Sure you do: the GIMP evens refers to itself as GIMP on its official website, in support docs, on Wikipedia, and on its own Twitter account…

Yet, not on the desktop, strangely.

On the desktop The GIMP goes by the full title of “GNU Image Manipulation Programme” (or if you’re using GNOME Shell, the “GNU Image Ma…”).

Minor quirk, but one I can’t say I ever noticed until Alex pointed it out (as I mentioned earlier in this post: I don’t pay attention).

There’s been lots of faux controversy and idle time debate around the name of “The GIMP” over the years (which has always been an acronym).

Personally, I don’t mind what name it uses, but a lick of consistency never hurts.

Thank you for not mentioning that this post has gone out on a Sunday evening and not a Friday evening (as per the past three weeks). I wanted to move the series to a Sunday in a subtle, non-assuming way, and I’m telling myself I succeeded in doing that. So, y’know, don’t ruin the lie 😅.

Home » Opinion » This Week Twitter Taught Me: Thunderbird is Go, But Windows Text Editors are Not! 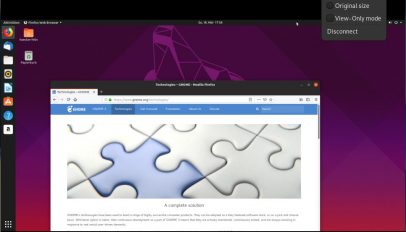 ‘Remotely’ is a Simple VNC Viewer For Linux Desktops
Read Next