The Ubuntu 19.10 codename has been revealed in full — but it’s probably not an adjective + animal combo any of us would’ve guessed!

Admittedly we’ve barely had time to soak up all of the Ubuntu 19.04 features on offer in the latest release, but planning for the next version of Ubuntu is already underway!

And it development always starts with a codename.

Ubuntu releases are always named alphabetically, so a genius wasn’t required to know that the Ubuntu 19.10 codename would use an alliterative adjective/animal combo based on the letter “E”.

Launchpad, the online code hub where Ubuntu development takes place, revealed the first half of the codename as Ubuntu 19.10 as “Eoan”.

Collins Dictionary states that the word Eoan is an adjective that means “of, or relating to, the dawn”.

Other online dictionaries suggest the word is also used to describe something ‘of the east’.

I can’t lie: “Eoan” is not a word I’d ever heard of before today. I am told it pops up in poetry, and is a valid Scrabble answer.

But it’s still only half of the codename.

Mark Shuttleworth typically reveals the full codename in a blog post. He hasn’t this time, leaving it up to eagle-eyed developers to spot the 19.10 codename.

The landing page for Ubuntu 19.10 daily builds reveals the second half of the Ubuntu 19.10 codename, the animal mascot as “Ermine”.

This is the second Ubuntu release to use the letter “E”. The other being Ubuntu 6.10 “Edgy Eft” released back in 2006.

So what’s an “Ermine” when it’s at home?

Well, it’s the formal name for a Stoat, often described as a short-tailed weasel. Ermine can be used to describe a stoat wearing its pure white winter coat (e.g. “Look at that pretty ermine!”), or simply its fur (i.e. “the evil man wore ermine”).

Ermine fur is used to line the robes of peers who sit in the British House of Lords — as if need any further indication symbolism of how antiquated and outdated they are!

Ubuntu 19.10 will be the next short-term release of the Linux-based operating system. It’s an important one too, being the last chance to land major new feature ahead of next year’s long-term support release, Ubuntu 20.04 LTS.

Thanks to everyone who sent this in! 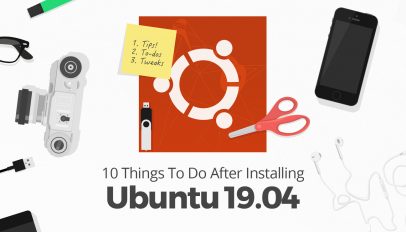 10 Things To Do After Installing Ubuntu 19.04
Read Next