The recent Deepin 15.8 release impressed many on its arrival — now a new promo video published by the team behind demonstrates precisely why.

The five-minute clip, which we’ve embedded above, showcases the distro’s recent crop of UI changes and UX tweaks, including a new boot menu, disk encryption feature, and optional ‘dark mode’.

And call me sucker for eye candy but it all looks terrifically bling-bling. Whether the blurred ‘fluent design’ aesthetic is to your own personal tastes or not, isn’t it great to see that such a distinctly different desktop available?

Elephant in the room time.

Whenever I write about Deepin on these pages I see a sea of 🤨 staring back at me (that’s a face with one eyebrow raised emoji, in case you can’t see it).

And I absolutely get it; the Deepin Linux distro is developed in China by a private company and, accordingly, that makes some folk suspicious, put off trying it for fear of “backdoors” (etc) in the code.

That concern and paranoia is understandable given political climes. It’s okay to be suspicious. It’s allowed. But at the same time I wonder if some of those concerns are a touch over-hyped or too keenly indulged. Though popular, Deepin is very much a niche within a niche within a niche. Once wonders what the real advantage of using it as an attack vector would be. It doesn’t run on servers, it’s aimed at novice computer users…

Now, admittedly, I’m not a security expert. Not by any stretch. But plenty of awesome people in the Linux community are and I haven’t heard of anyone finding any dangerously duplicitous or otherwise untoward activity happening in Deepin (the distro) or its desktop environment.

Linux Deepin is an open source Linux distribution just any other. The majority of its code mirrored on GitHub; the Deepin desktop (and many Deepin apps) is available on other Linux distributions too, including Manjaro; literally anyone is free to inspect the code looking for nefarious nooks and ciphering crannies.

And while Deepin (the distro) has an end-user license agreement (EULA) the Deepin desktop environment doesn’t; it’s available to install and use on other Linux distributions. So if you like what you see, but want a more familiar base, there are options.

If you’re interested in downloading Deepin 15.8 to see what the fuss about, you can do so pretty easily.

Grab an ISO from the official Deepin website (though the download may take about 2 months, 5 days and 17 hours to complete) and install to a partition or try as a live boot before installing. 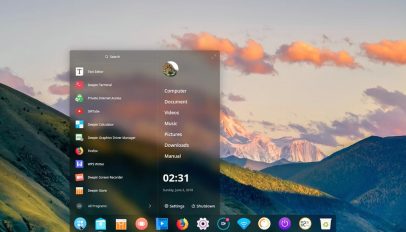