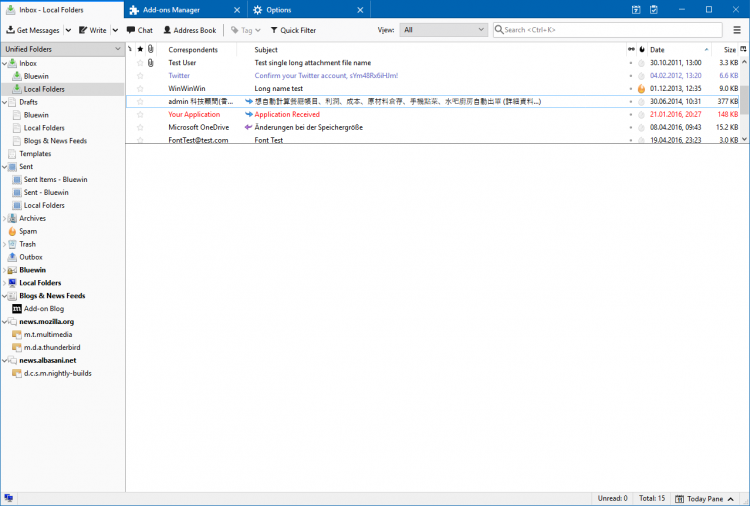 A bold new look is coming to Thunderbird, the open-source desktop email client.

In a blog post Thunderbird’s community manager explains reveals that Thunderbird will adopt the Photon UI used in the latest Mozilla Firefox releases.

Beta builds of the email app already carry the new look, which you can see in the picture at the top of this post, and it should feature in the next stable release of the app too.

Thunderbird got a ‘new home’ with the Mozilla Foundation earlier this year. The move helped add some stability to what had been uncertain few years for the project, following Mozilla Corps decision to ‘decouple’ it from Firefox to let the community lead its development.

Although the Photon UI is, in the screenshots provided, a little austere looking to my tastes it does sort of makes sense for Thunderbird to keep pace with the look of its former stablemate, and should help to deliver some degree of consistency between the apps.

That said, I think I’ll stick with the awesome Thunderbird Monterail theme we spotlighted earlier in the year as it gives the somewhat stale email app a thoroughly fresh look and feel.

Superficiality aside, we also now know that Thunderbird has no plans (for now) to drop support for legacy add-ons.

This means anyone relying on a third-party plugin to provide additional functionality inside the app can continue using it with future releases provided that add-on makers make a few compatibility tweaks first.

Details on the ins-and-outs of the ‘compatibility tweaks’ can be found on the Thunderbird wiki.

Thunderbird is also adding WebExtension support so that users can also opt to use modern plugins and extensions with the app.

Thunderbird 52 is the current stable version (which, if you’re using Ubuntu, you likely have installed). Thunderbird 57 and 58 beta releases are also available for testing.

For more details on how to download the app and how get involved in its development point your browser at the Thunderbird website.

Home » News » The Thunderbird Email Client Is Getting a New Look

Ubuntu 17.10 Breaks the BIOS on Some Lenovo Laptops
Read Next