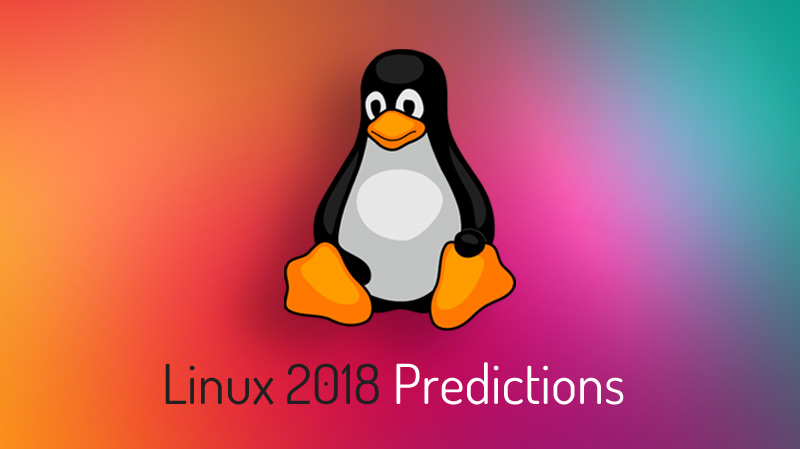 With a new year upon us we felt it was time to share some of our Linux predictions for 2018.

Whether they are likely to happen, or just hopeful thinking, is up for debate.

But 2017 showed us that nothing is truly predictable. During the previous 12 months we saw:

And a lot more!

But what does 2018 have in store for Linux? Well, here are 8 predictions for the coming year to get you thinking…

Our Linux Predictions for 2018

Prediction: Ubuntu 18.04 LTS will be the most popular release of Ubuntu in years.

An Ubuntu-focused news site suggesting that a new Ubuntu release will go down well is —let’s face it— hardly unexpected.

But indulge us for a second because Ubuntu 18.04 LTS ‘Bionic Beaver’ is not a typical release.

It’s actually something of a gamble.

See, tens of millions of people use the long-term support (LTS) versions of Ubuntu because, by and large, they stay the same. They’re reliable, dependable, and familiar.

But when those LTS users do their next upgrade in 2018 they’re going to get a major shock.

‘Ubuntu 18.04 will introduce millions of users to GNOME Shell for the very first time’

Ubuntu 18.04 will introduce millions of users to the GNOME Shell desktop for the very first time; to Wayland; to different ways of doing familiar things. And with the possibility of a new GTK and icon theme, snap apps installed by default, and other changes, the Bionic Beaver might be too much, too soon, for some.

But overall I think the release will pay off.

The Ubuntu desktop is undergoing course correction, driving forwards with GNOME, with Unity firmly in the rear view mirror. Many of the those who ditched the distro when Unity was introduced will, I reckon, be willing to give it another go. This will help to off-set any migration in the other direction.

Another thing Ubuntu has sorely lacked for the past couple of years is press attention. Ubuntu 18.04 LTS could very well be the release that gets the distro back in the headlines of the mainstream tech media.

2. Canonical Will Shore Up More Support for Snap Apps 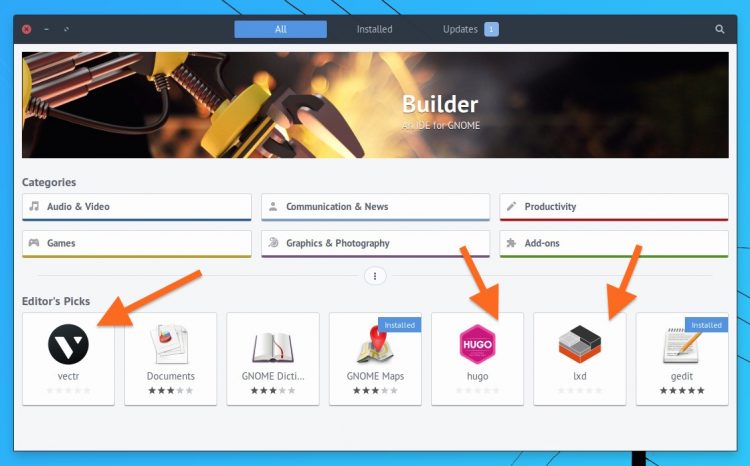 Besides tinkering with themes Canonical’s only real spot of investment in the Ubuntu desktop now is via snaps, their homegrown containerised packaging format.

‘Snappy already has a lot of big-name backing, including Microsoft and Spotify’

In 2018 I think support for Snaps will strengthen.

Canonical is already promoting Snap apps in Ubuntu Software using a featured banner, snap-only Editor’s Picks, and listing snap app result above all else for in-app searches (regardless of whether the snaps are a match or not).

In short, it has the end-user side nailed. It doesn’t (technically) need other Linux distros to jump on board in the way Flatpak does as it has a critical mass that’s able to sustain it.

Plus the format already has a lot of big-name backing. There are snaps for Visual Studio Code, Hiri, Mailspring, Atom, LibreOffice, and more recently Spotify. Software vendors are being won over by Snaps (thanks, in large part, to a seriously slick marketing and outreach operation by Canonical employees) and that will, I think, continue. 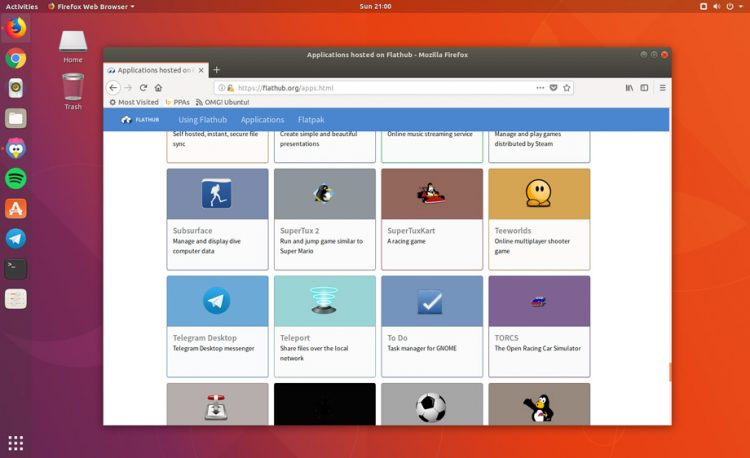 Canonical will be busy pushing Snaps on the Ubuntu desktop in 2018 but the rest of the Linux community will move to embrace Flatpak and the Flathub App Store.

Expect to hear of more Linux distributions opting to ship with Flatpak support out of the box. I’m also hopeful we’ll see several (all eyes on Fedora) choosing to include Flatpak apps in their default images.

Redhat’s clout should help make sure a few big-name apps adopt the packaging format, alongside lots of community developers opting to distribute their apps through Flathub. 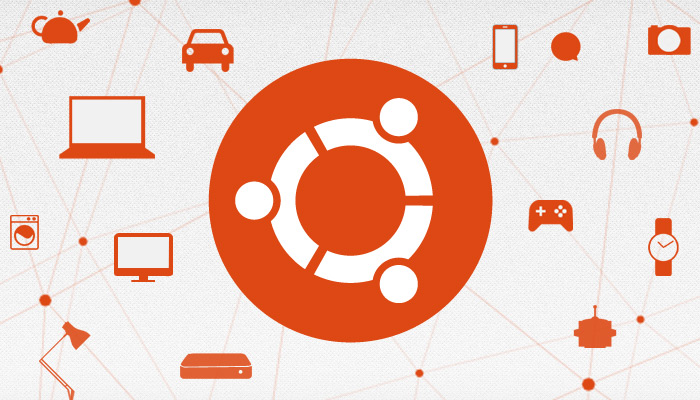 From fridges and drones to robots and autonomous vehicles, Ubuntu is fast becoming the beating heart behind a slate of cloud-connected things.

And where Ubuntu doesn’t end up powering a device it’s still at the core of the development ecosystem.

Ubuntu core is well placed to offer standardisation to IoT environments, and security. It can be used to power sensors, to process data, handle updates, and provide the ability to communication across infrastructure.

Other Linux vendors talk about open-source being integral to IoT, but from where I am sitting only one company seems to be addressing the specific needs of those using open-source in IoT — and that’s Canonical with Ubuntu.

Watch Guard predicts a huge increase in security attacks on IoT devices running Linux in 2018 and Ubuntu Core, with frictionless transactional updates may just be the band-aid the industry is looking for:

Prediction: PipeWire will be used by more distros.

PipeWire aims to do for Linux video what PulseAudio did for sound — and in 2018 I think we’ll see it arrive plumbed in to more Linux distributions by default.

The technology want to to modernize the way video and audio processing is handled on Linux, especially as adoption of Wayland and Flatpak increases.

Fedora 27 already ships with a degree of PipeWire support. I reckon we’ll see other desktops follow their lead and ship PipeWire to improve their handling of audio and video.

Prediction: Linux marketshare will increase — but not by a huge amount.

Most lists of Linux predictions will include something related to Linux marketshare. While we’re choosing to steer clear of the cliché ‘Year of the Linux Desktop’ trope, we do think we’ll see gains for Linux in 2018.

Ignoring erroneous highs, Linux marketshare now seems to be consistently above the 2% mark.

The march towards 3% is now on. And if you’re one of those who count the Gentoo-based ChromeOS as a Linux distribution, we’re fast approaching a 6% share in the USA alone.

Some of you will hate me for saying this but, folks, I think Linux power management is terrible.

Chromebooks, MacBooks and Windows laptops are all capable of 10+ hour battery life, but running Linux on the same device can cut that in half — or worse!

The good news is I think we’re going to see a lot of effort to improve battery life on Linux laptops start in 2018.

Linux distributions will double-down on power management to take advantage of improved graphics drivers, kernel features, as well as introduce tweaks to desktop environments and strip back background processes.

Fedora 28 and elementaryOS 0.5 are two distros in particular you’ll want watch with regards to this. Sadly I don’t think we’ll see much (if any) effort made by Ubuntu on this front.

Prediction: Dell and other vendors will expand their Linux offerings.

Dell recently updated its swathe of Ubuntu powered portables — no surprise given it says it’s sold tens of millions of dollars‘ worth of XPS laptops preloaded with Linux.

Next year I think we’ll see Linux pre-installs pick up pace with more offerings from other OEMs, including Slimbook, Station X, and Entroware. It would be great to see Linux laptops offered from some of the bigger manufacturers too. HP, for example, is no stranger to Linux. And following issues with its BIOS, it’d be great to see Lenovo making a Linux offering available. 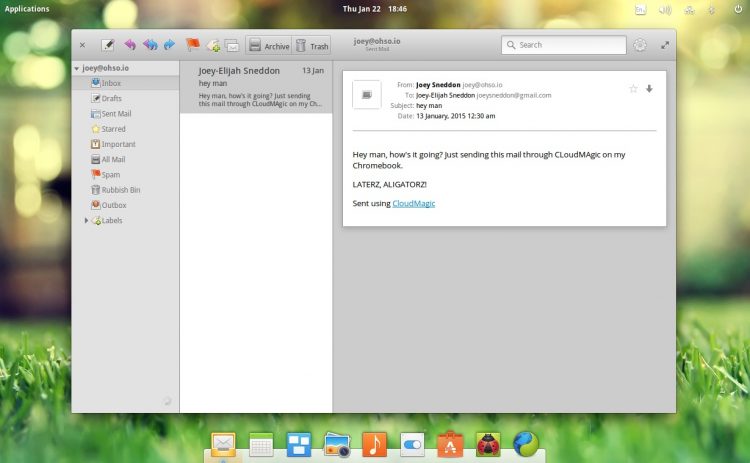 I really, really hope we see proper HiDPI support and fractional scaling introduced in GNOME, Mutter, Wayland and everywhere else it’s sorely needed. It’s likely that more laptops will come with 2K and 4K displays in 2018, so Linux really needs to catch up to support them.

Graphics driver improvements is another must have, particularly graphics drivers that play nice with Wayland, and help improve the state of VR support on Linux boxes.

On the gaming front I’m told Linux users can expect a steady stream of big-name game titles to arrive with day-one Linux support in 2018.

All eyes will be on Ubuntu 18.04 LTS in April, but plenty of other distros will be making headlines. Among them elementary OS 0.5, Solus 4, and Linux Mint 19.

Elementary’s switch to a new Ubuntu LTS base will give the tightly designed distro renewed appeal, particularly to those put off by Ubuntu’s switch to GNOME Shell.

Linux Mint 19 will deliver few surprises (Mint in general seems to be stagnating a little) but continue to have an enduring appeal.

But 2018 will really be the year of the ‘from scratch’ Linux distributions like Solus (which is very likely to move up and become one of the top 5 distributions on Distrowatch).

What are your open-source, Linux or Ubuntu predictions for 2018? Share your thoughts in the comments space below! 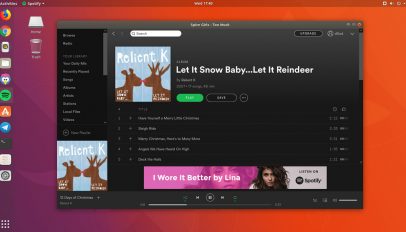 Spotify Now Available as a Snap App on Ubuntu
Read Next