If you’re yet to be won over by Ubuntu’s switch to the GNOME desktop, there is a glint of hope on the horizon.

A proposal to create a new community Ubuntu flavor which uses the Unity 7 desktop by default is gathering support within the Ubuntu community.

The idea has already won the backing of a former Compiz/Unity desktop developer and snagged endorsement from several Canonical employees, including Martin Wimpress, the lead developer of the Ubuntu MATE flavor (so he knows a thing or two about what makes a successful spin).

Discussions are (understandably) still in the early stages. Canonical has given those involved their blessing to use the “Ubuntu” trademark.

Debate remains as to whether the project should just maintain the existing Unity code base (and ensure it keeps working in Ubuntu 18.04 LTS), or dive in and develop new features and designs on top of it.

Some (perhaps prematurely announced) Unity desktop forks popped up as soon as Canonical had placed the final period in its bombshell announcement — but this is a different proposal to those forks as it wants to maintain the real, regular, repo version of Unity.

Who knew Unity was popular?! 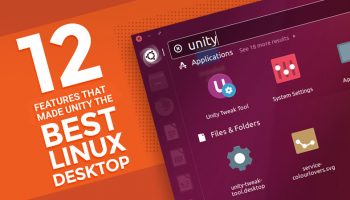 Related Story
12 Features that made Unity the best Linux desktop

The popularity of post-Ubuntu Unity projects is, for an Ubuntu watcher like me, a bit of a strange about-turn.

The Unity desktop had, until recently, been routinely criticised as example of Canonical working against the interests of the wider open-source community rather than with it (“not invented here” syndrome).

But in the time since Canonical unceremoniously jettisoned the entire Unity project — both current and next-gen versions — a growing band of fans and admirers of its workflow have emerged.

Rather than being left to collect dust on the outer shelves of the Ubuntu repos (the plan was to move Unity into the universe repository for 18.04 LTS) or silently shuffling off in to the great byte beyond, the project is, arguably, in ruder health than ever.

Let’s not forget that despite some patches and fixes the Unity 7 desktop has been in maintenance only mode for the past couple of years.

But thanks to the Unity 7 maintainers project the desktop may live on.

While long-term goal of this project may be the blessed decree of officialdom from the Ubuntu infrastructure, there are, for now, more pressing practical matters to tend to, like recruiting actual developers to work on the code.

There’s already a mailing list set up to further scope the idea out. And there’s an 18.04-based ISO image is already available for testing.

Could It Be Called “Ubuntu Unity Remix”?

So it’s entirely possible that this project could be called Ubuntu Unity Remix.

Regardless of the eventual branding I, personally, think the idea of an Ubuntu spin using Unity is a great one.

So if you miss the quick-fire nature of the Unity Dash, the consistency of indicator applets, and/or an Alt+Tab that makes sense (!) this is a project that’s well worth keeping your eye on — I know I certainly will.

Home » Community » Miss Unity? An ‘Ubuntu Unity Remix’ Could Be on the Way…