Intel has teamed up with arch-rivals AMD to create a powerful new processor.

The unlikely pair are working together on a new unified chip that integrates Intel’s Core CPU architecture with AMD’s graphics technology.

Intel says the new processor should deliver the same sort of gaming performance as current-gen discrete notebook GPUs, but in a smaller, less power-hungry size.

This will allow OEMs and system makers to create thin and light laptops that provide the graphics power that gamers and content creators look for.

The innovation doesn’t stop there. The newfangled chip will also carry new, low-power HBM2 graphics memory. This takes up less space and is more performance than traditional DDR5 GPU memory.

“The new product, which will be part of our 8th Gen Intel Core family, brings together our high-performing Intel Core H-series processor, second generation High Bandwidth Memory (HBM2) and a custom-to-Intel third-party discrete graphics chip from AMD’s Radeon Technologies Group – all in a single processor package,” Intel say in a press release.

A thin and light laptop that doesn’t cut corners on graphics performance is, for me, a pretty sweet sell.

When can we expect to buy this hybrid Intel AMD processor? As early as next year.

Intel say they’ll be revealing more about the chip, including the branding and devices that make use of it, in the coming months.

I’m definitely going to be keeping my eye on this. 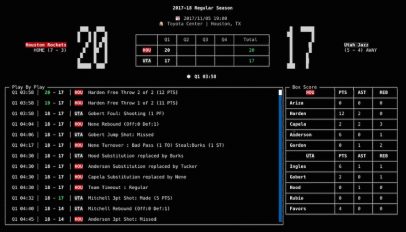 Watch NBA Games in the Terminal
Read Next