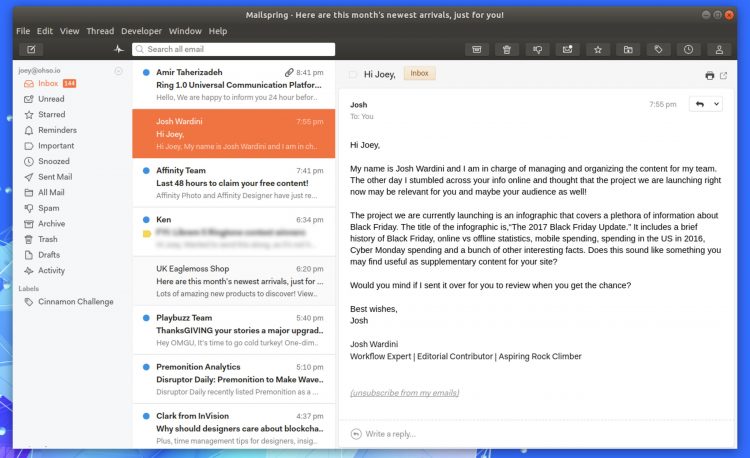 Mailspring is a new free e-mail client for Windows, macOS and Linux.

It’s a fork of the open-source Nylas mail client but with a native C++ sync engine, fewer dependencies, and vastly improved performance.

Earlier this year we shared word that Nylas Mail is dead. The company behind the app state they are “sunsetting further development of the product”.

Nylas was a breath of fresh air amongst the somewhat-stale stalwarts of the open-source mail client scene. And while the Electron-based app wasn’t the most resource efficient of apps it did bring some new features and a striking design to the table.

But you don’t need to miss; Mailspring is the perfect Nylas mail alternative.

Mailspring is a Nylas fork created by one of the apps original developers. It’s said to be ‘faster’ and ‘leaner’ than the version its based.

‘The JavaScript sync engine has been replaced by native C++ core’

Mailspring keeps many of the useful features that made Nylas Mail popular, but improves the foundation they sit on.

How is Mailspring better than Nylas?

The developers behind Mailspring have rewritten core parts of the app to be leaner, and more efficient.

The (resource heavy) JavaScript sync engine that slowed Nylas mail down has been replaced by new, native C++ core (just like those used in macOS e-mail apps Sparrow and Airmail).

The new native core means Mailspring uses around 50% less RAM than Nylas and is able to sync your email faster.

And that interminable delay between opening the app and the window appearing?

If you always liked the look of Nylas N1, but were put off by its use of a remote server to sync your mail; or if you tried its less-connected successor, Nylas Mail, only to find it too heavy for your system or battery, I really recommend you give the new fork a spin.

You can browse mail from all your accounts using a unified inbox, and quickly find any mail using the built-in search.

Nylas mail themes work out of the box with Mailspring too — perfect if you want the client to look a little more ‘Ubuntu-y’.

Although the app itself is open-source the ‘Mailsync’ engine that powers it is not.

If that doesn’t put you off then the fact that app also requires you sign up for a Mailspring ID  regardless of whether you want to use the advanced features this ID provides (like read receipts, etc) might!

Naturally there has to be some angle in this to help fund development the client going forward. And to that end paid “pro” accounts remain on offer.

But here’s the really great bit: just one thousand paid subscriptions would make >Mailspring a stable business and help ensure its continued development.

There’s currently no word on when pro accounts will be available, or how much they’ll cost.

You can download Mailspring 1.0 for Windows, macOS and Linux from the project website. The source code is hosted on Github. 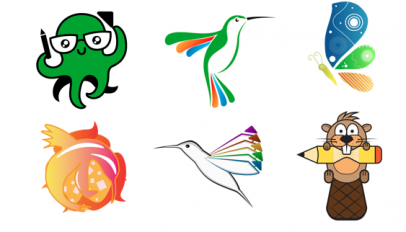