If you loved the look of the Unity 8 desktop as used in Canonical’s shelved Ubuntu phone and tablet project, I can guarantee you’re going to love the following icon set.

Why? Because it is the Ubuntu phone and tablet icon set!

Yup, even though Ubuntu Touch died and Canonical (painfully) let the majority of its design team go, the story isn’t yet done for the Suru icon theme.

The bold colors, paper foldes and rounded ‘squircle’ frame — a shape I once described as looking like a Starburst¹ squeezed between two fingers — helped staple the visual identity of the fledgling platform to the wider open-source consciousness.

The fact you’re reading a post about these icons right now, and that you know what I’m talking about when I use the word ‘Suru’, is proof of that.

The United GNOME GTK & GNOME Shell theme was inspired by the (admittedly few fleeting) glimpses we got of what the Ubuntu Design team had planned for the Unity 8 desktop.

The accompanying icon set was more familiar as it shipped on four phones and a tablet.

Now it’s being revived by the designer of the popular Moka icon set.

Picking up where the Ubuntu design left of, they plan to make polish, tweak and fix what was left, sprinkle in a set of missing mime types (icons used to denote different types of files) and make it available for everyone to enjoy, for free.

‘The developer has no plans to include icons for third-party apps or branded software, like Firefox or GIMP’

One thing that you should note is that the developer has no plans to include icons for third-party apps or branded software (i.e. Google Chrome, VLC, GIMP, and many other apps we all use, etc) in the base set.

“This set is designed for desktop environment coverage only, pull requests or issues regarding branded icons or theming third-party applications (for example, Firefox) will be rejected,” the Github page states.

If you like what the look of this revived Suru icon set, and want to try it out on your own desktop (Ubuntu or otherwise!) you can grab the source code from Github, compile it using make, and then, using a tool like GNOME Tweak Tool, set Suru as your system icon theme.

Keep in mind that the theme is a work in progress and as such it is incomplete. It’s also not a full icon set, falling back to use the Humanity/Ubuntu Mono icon set where it lacks icons.

¹Aka Opal Fruits, their rightful name. 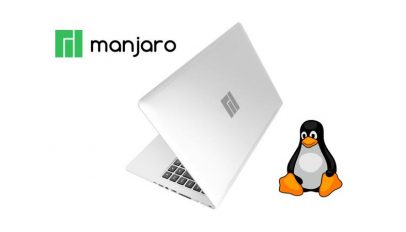 Manjaro Linux Now Has Its Very Own Laptop
Read Next