It’s not often that I get to write about a new desktop shell — especially one I’ve never heard of! So when a reader mailed me this ask to ask exactly that, I had to say yes.

The desktop shell in question is Manokwari. It’s built for GNOME 3 using GTK+ and HTML5 and is, I’m told, an evolution of an earlier project called blankon-panel. That project didn’t ring any bells with me, but it may  for you as blankon-panel, now Manokwari, is the desktop used by the BlankOn Linux distribution.

The main “shell” is composed of a top bar with two hidden side panels (think Budgie Raven). These sidebars can be opened at any time by clicking on an icon (for the left one) or mousing near the upper most corner (for the right one).

The Applications panel handles (what else) application launching through a series of collapsable category headers. Although there is search bar present at the top it doesn’t search for applications. Instead you get profiled shortcuts that will open your search on Google, Wikipedia, etc.

The right-hand panel serves as a mix of settings panel and status area. You get MPRIS compatible sound controls, and a configurable weather applet, plus quick links to open panes within GNOME System Settings.

The top bar has (L-R) a toggle to unfold the Applications Panel, a task list, a volume applet, support for displaying indicator applets, a basic calendar, and a workspace switcher.

The task list applet lets you switch between running applications. Mousing over these icons will reveal full window titles in a secondary bar.

I found the top bar icons far too small to manage apps effectively, so threw Plank into the mix. This created a more familiar set-up.

Manokwari is built to sit atop GNOME 3. It reuses existing technologies rather than forking its own, separate  versions. It uses Mutter for window management and compositing (just like Budgie) and the GNOME lock screen.

Although some of the UI is GTK+ the developers behind the desktop plan to replace it all with HTML5 in the future.

Exactly when? Well, who knows. The code on Github hasn’t been touched since December, 2016 but has recently been packaged up for use on Ubuntu.

Manokwari is third-party software. Install and use at your own risk.

If you like what you’ve seen of the desktop in this post you can try Manokwari out for yourself.

The following PPA packages the desktop, its session, settings, a (non-working, in my tests) GTK theme, and a tiled-theme icon set.

You can install Manokwari on Ubuntu 16.04 LTS (only, at the time of writing) by adding the following PPA to your Software Sources:

Once installed you will need to log out, select the Manokwari session from the Unity Greeter (or GDM, if that’s what you’re using) and log in as normal.

The desktop may take a little time to load fully. There’s no desktop dock application by default; task management and window switching is done done using icons on the top bar. I recommend using Plank with it.

If you try it out for yourself do pop back to share your thoughts and opinions.

Although far from polished, and currently lacking many of the features that are necessary for sustained daily use, Manokwari is a promising alternative to fuller-bodied desktop shells. As in Deepin the use of HTML5 to craft the shell sounds odd at first but does allow for creative and innovative integrations. 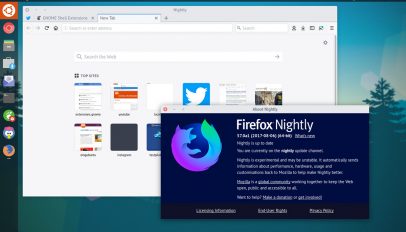 Firefox Nightly — How To Go Hands on with the Newer, Faster Firefox
Read Next