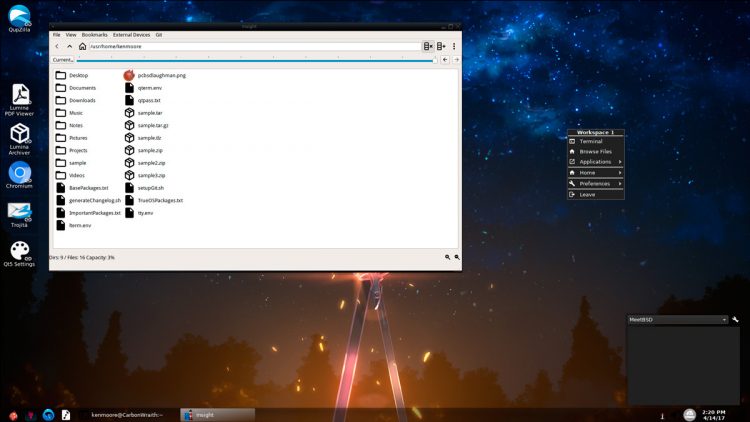 A new version of the Qt-based Lumina desktop environment is available to download.

Lumina 1.3.0 receives a “large number of updates and improvements” according to the release announcement, as well as  “performance improvements under-the-hood of the desktop.”

The Lumina Desktop Environment is a lightweight user interface for desktop Linux and Unix-like operating systems, such as BSD. Uniquely, the desktop is built using plugins, which gives the overall form and function of Lumina a bespoke sell.

Although Lumina is mainly targeted at BSD it can be compiled, installed and run on any Linux distribution, including Fedora, Arch and — yup — Ubuntu.

Lumina 1.3.0 sees the desktop distribution its own “material-design” icon themes for use as the default icon set. The desktop previously relied on the Oxygen icon set developed by the KDE project.

Big performance improvements have been made to the default file manager app. Along with faster loading of folder contents the app also gains a new “tree view” display, making it easy to view all the directories on your system. The file manager also picks up integration with the lumina-archiver which debuted in Lumina desktop 1.2.0

You can now interact with folders on the desktop; there’s continued work to improve the look and feel of the desktop on HiDPI displays; and the Ctrl + Q shortcut can now be used to quit apps.

An all-new media player is included as part of this update, called (obviously) lumina-mediaplayer.

This utility is ‘designed for streaming online radio content (Pandora radio at present, powered by the piano bar CLI) and playback of local media files,’ according to the Lumina team. Most popular audio formats are supported by the app including .ogg, .mp3, .mp4, .flac, and (if anyone still uses it) .wmv.

The team add that the player, while useful, is ‘not trying to be a flashy “do anything” multimedia player’. Instead the player is design to stay out of your way, in the background. The app can be controlled through a small tray icon.

How to Install Lumina Desktop on Ubuntu

Want to install the Lumina desktop environment on Ubuntu?

You install the very latest release of the Lumina desktop on Ubuntu 16.04 LTS or above by compiling it by hand. Don’t be scared; the Lumina website has a pretty thorough guide on how to build it should you feel brave enough to do so.

A third-party and unofficial Lumina PPA is also available for use (at your own risk, of course). This PPA does not, at the time of writing, contain the Lumina 1.3 release this article is about.

OstroLk I am just playing with other people's work on G40.…
New GNOME Designs Explore a ‘Bottom Bar’ Layout for GNOME Shell