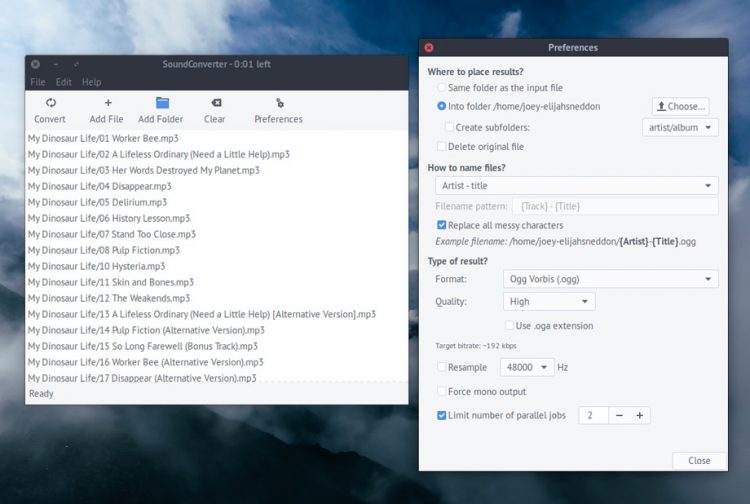 Though I tend to stream music from the cloud when at my desktop PC, I prefer to download and play local audio files when listening to podcasts and audio books on the move.

Earlier this week I needed convert a stack of old audio books from the .m4a format to a more Android-friendly format like .mp3 — and  SoundConverter did what I needed effortlessly.

Sound Converter is an audio converter app for Linux. it can process any audio (or video) file supported by GStreamer, including the ubiquitous MP3, the more marginal M4A, as well as movie files like MOV and MP4.

With a single click the app can chomp through and convert any number of audio and video files to an audio output choice of your choice, including Ogg Vorbis (.ogg), FLAC (.flac), or WAV (.wav) format, and, of course, MP3 (.mp3).

Another big plus point to Sound Converter versus other apps of this kind is that it has full support multithreaded conversion. This sounds technical and aloof but it means the app is able to convert large numbers of files quickly, utilising all available processor cores.

Other features include an advanced filename and folder organisation based on audio file tag. The utility is able to extract the audio from videos files too.

Could you probably do all of the above a teeny bit faster by using the command line? Probably.

But drag and dropping a folder of audio files on to this app, hitting convert, and getting you files promptly spat out in the format you need isn’t exactly a great hassle either.

Sound Converter is not a new app, and it hasn’t been recently updated — but it works, and works well. The app was recommended to me by Martin Wimpress (the Ubuntu MATE guy).

You can install Sound Converter on Ubuntu straight from the Software App. Other Linux distros likely have it in their archives too.

Home » Apps » Yup, This is The Best Sound Converter for Ubuntu