At the time of writing this is not the latest Corebird 1.5, released last week, but the older Corebird 1.4.x release.

Corebird 1.5 is now available as a Snap.

Although one release behind this version works just dandy, and, cup-half-full, is a more recent version of the client than that which is available to install from the traditional app archives on Ubuntu.

Plus, because this is a Snap app, it is also available to users on Arch, Fedora, and other Snap-supporting Linux distributions.

The maintainer of the Corebird Snap is working to get version 1.5 of Corebird compiled, but wanted to get a first release out there. I would suggest you keep an eye out for that update in the near future but as Snap updates install silently in the background you’ll probably not notice!

We wrote a primer on beginners guide to Corebird last year. Although a few of the screenshots in that post are a bit out of date most of it still applies. So, if you’re new to Corebird, do check that post out.

To install the Corebird Snap app on Ubuntu 14.04 LTS or later (or as on any Snap supporting Linux distro) just pop open a new Terminal window and run this command:

If you’re using Ubuntu 17.04 you can skip the CLI and click this button to install Corebird from Ubuntu Software:

As with other Snaps apps there are a couple of on-going issues you’ll need to be accepting of while using the Corebird Snap, like the lack of theme integration. Corebird does, mercifully, use Adwaita by default, not the Windows 95 style GTK other Snap apps seem to default to.

If you’re on Ubuntu you also need to install the following additional package to be able to open links in Snap apps in your non-Snap browser — crucial for Corebird as it’s how the client authenticates!

The Corebird Snap is a ~112MB download, so if you’re on a metered or capped connection you may prefer to stick the PPA version which is a more modest  2.2MB.

If you plan to run the Corebird Snap app and the regular version side-by-side be aware that a) you can’t run them at the same time, and b) settings are not shared between the apps (by design). 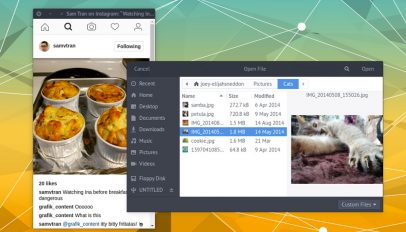