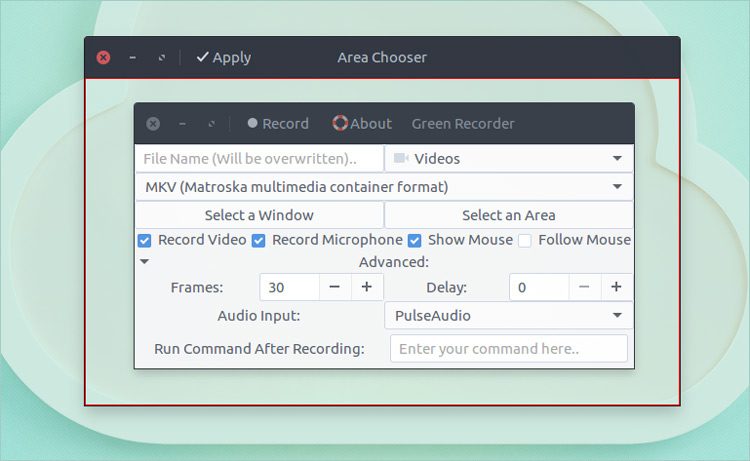 A new version of Green Recorder, a desktop screen recording app for Linux, has been released.

You can now select a specific window to record, support to record a specific section or area of your desktop, and choose to show or hide the mouse, or have the ‘area’ you select ‘follow’ the mouse.

Not sure what I mean by that? Well, as you can see demoed in this short video, when the ‘select an area’ is enabled with the (also new) ‘follow mouse’ option the video is cropped to your chosen area, and travels accordingly:

You can also record a specific app window when it’s running and visible your desktop (albeit recorded without window borders).

Another new feature in Green Recorder 2.0 is the ability to automatically run a command after recording completes, e.g., open YouTube in Mozilla Firefox, ready for you to drag n’ drop your screen capture to upload.

When run on Wayland (on GNOME) Green Recorder uses the V8 encoder instead of the default V9 encoder because, the developer says, of high CPU & RAM use. Wayland recordings can only be saved in the WebM format, and only full-screen or specific area recordings can be made. These restrictions do not apply on Xorg.

You can see a demo of how slick Wayland screen recordings look in the following video, made by Green Recorder’s developer. He talks though the new features in the app before screen capturing DOTA2 running on Wayland.

To install Green Recorder 2.0 on Ubuntu 16.04 LTS (and above) you’ll need to add the Green Project PPA to your software sources. This is simple enough to do; run the following commands in a new terminal session, entering your root password when prompted:

After installation has completed you can launch the app from the Unity Dash by searching for ‘green recorder’.