It’s been several months since Spotify removed the lyrics function from it’s apps, and it shows no signs of returning soon.

If you liked being able to tap a button to instantly see lyrics for the currently playing song, we’ve found a nifty little indicator applet that can help.

Instant Lyrics by Bhrigu S., offers up a quick way to get song lyrics for the currently playing Spotify track.

This simple indicator applet is written in Python and runs out of the system tray area. It works on most Linux desktop environments, including Unity, GNOME Shell (where we tried it), Cinnamon and Budgie.

Instant Lyrics is designed to work with the official Spotify for Linux client, with which it is able to automatically detect the current playing track and fetch lyrics for it. 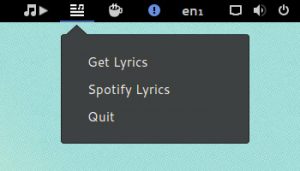 When a song you want to know the words to comes on, just click the menu item followed ‘Spotify Lyrics’. Instant Lyrics then fetches the lyrics to the song currently playing in Spotify and displays them in a separate, scrollable, resizable window.

Unlike Lyricifier (an Electron app), CoverGloobus (a desktop widget), Instant Lyrics keeps squarely out of your way. And unlike the integrated Spotify web player solution we mentioned before, you can keep using the official Spotify for Linux app.

Not using Spotify? No worries; you can still use the applet to fetch lyrics.

Just click the ‘Get Lyrics’ menu option to open the lyrics window. Here you’ll see a search box where you can enter the artist and track name of the lyrics you seek, hit ‘Get Lyrics’ and start singing along!

Now for the dropout: Instant Lyrics is not the easiest app to install. There’s no easy-squeezy installer package ready to download, so you’ll need to run it from source or use an AppImage.

To build from source you’ll need a couple of non-standard dependencies.

First install everything you need to run the app:

Followed by everything the app needs to run:

Finally, download the latest snapshot of source code from Github:

Extract the zip archive. Then, using the Terminal, move inside and run the InstantLyrics.py file. 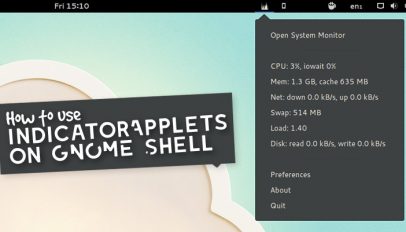 How To Use Indicator Applets on GNOME Shell
Read Next