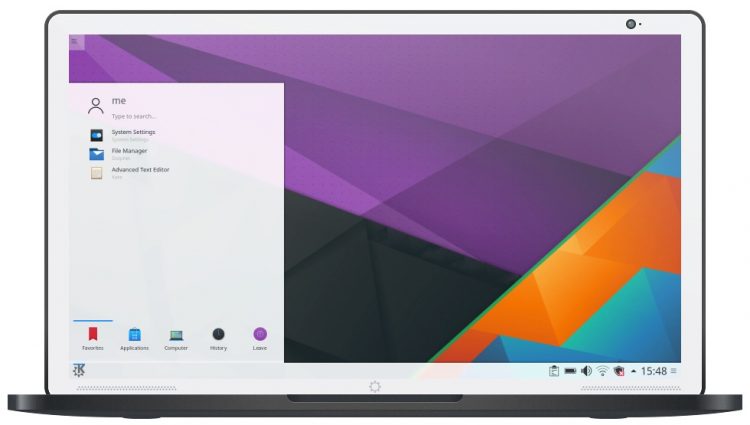 While I wouldn’t say I’m fully orientated in K Desktop Environment land just yet I am enjoying the learning curve; playing with a desktop environment as configurable as Plasma is actually rather fun, and encountering quirks and new different workflows is a constructive challenge, making me think about why I ‘prefer’ to do things in certain ways.

Anyway, I’ve always found the ‘KDE’ experience on Ubuntu to be a little… Subpar wouldn’t be fair, but inelegant and patchy. KDE Neon — I love KDE Neon — feels completely different to Kubuntu or regular Ubuntu with a post-install Plasma desktop on it.

But I’m not sold on the application launcher (kickoff, is it?). It’s not that it’s bad it’s just that after so many years of using GNOME Shell and Unity, i’m used to a wider horizontal spread of app icons. The vertical pillar approach isn’t for me.

“It’s using the same backend I wrote for [Plasma’s] bundled launchers, and it’s a little bit like Application Dashboard scaled down into a small floating window, plus nifty horizontal pagination. It’s also really simple and fast,” he writes in a blog post.

The “good” news is that widget is available on the KDE Store, which means it’s available to easily install via the Add Widgets > Get new widgets option.

The “bad” news right now is that Simple Launcher requires Plasma 5.9, which has only just been released and isn’t (yet) available on KDE Neon or in the Kubuntu Backports PPA for Ubuntu users. As such it may be a little while before I (and maybe you) get to try it first-hand.

But, if you’re running a Linux distro that is powered by the very latest Plasma (it doesn’t work with the 5.9 beta, mind) I’d love to know what you think of it!