Looking for a nimble internet radio player app for Ubuntu?

Radiotray-NG may be exactly what you’re scanning for. The app is a fork of Radiotray, a once popular Ubuntu radio app whose development has all but ground to a halt over the past few years.

“It became clear as one of the early contributors to the RadioTray project that it was not getting the attention it required and was probably dead,” Radiotray-NG maintainer Ed Bruck explains on the project’s Github page.

“A lot of the technologies it used had moved on to newer versions and the bugs started piling up. I did my best to help users, but a new start was required. So, in early 2016 I began to write a new version.”

Radiotray-NG is the result of his efforts.

As radio is something I tend to have on in background I appreciate this simplicity, Radiotray-NG keeps out of my way. It doesn’t over-complicate the process; I can quickly tune in to my favourite stations in a literal couple of clicks.

Like the original Radiotray app Radiotray-NG is a panel-based radio player. When you run the app it sits tucked up in the system tray area being a little radio icon. The app works solely through menus; there’s no “main” GUI with big shiny player buttons.

I can quickly tune in to radio and tune out of everything else so I can focus on whatever it is i’m doing — like writing this blog post!

Some stations you listen to offer metadata on the currently playing programme or music track. Radiotray-NG will show a popup notification with these details when a new songs start. You can also check to see what’s playing by opening the main indicator menu.

Radiotray-NG isn’t perfect, though. To add stations you need to edit a JSON file (at least for now) with a text editor. The same ‘drawback’ applies to organise or edit existing stations. You’ll find the bookmarks JSON in ~/.confg/radotray-ng/.

Similarly, to adjust any of the app’s configuration options, like whether you see notifications, the default volume, and so on, you need to edit the config JSON in ~/.confg/radotray-ng/. 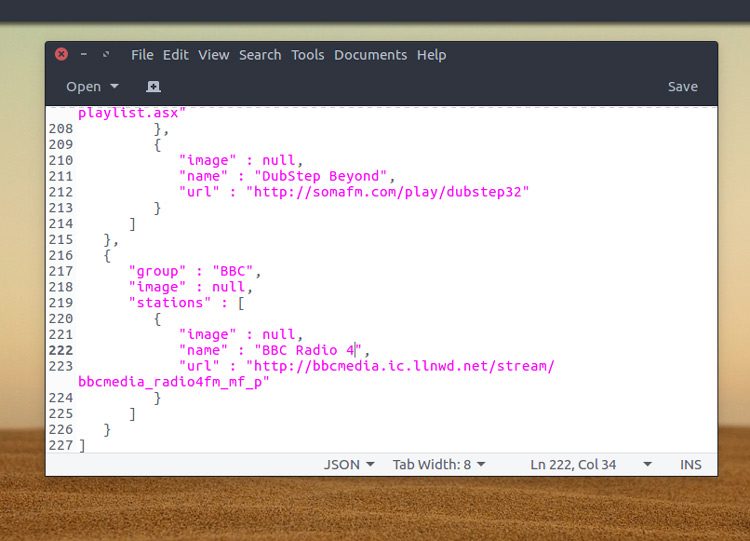 Editing a JSON file won’t intimidate everybody, though. For me, as I only listen to a handful of radio stations, I rather like that I can keep things super streamlined and cut out the cruft I’ll never use.

Radiotray-NG is perfect for casual background listening. While the effort required to add and edit stations will put some people off, as might the lack of built-in search tool, as a simple radio player the app is pretty hard to beat. It’s ideal for those want to spend less time setting up and more time tuning in.

A Radiotray NG PPA is not currently available but the app is still easy to install on Ubuntu.

You can download a 64-bit installer for Radiotray-NG from the project’s Github page, where you can also find more information on how to edit and format the bookmarks JSON file.

Learn more about Radiotray-NG on Github