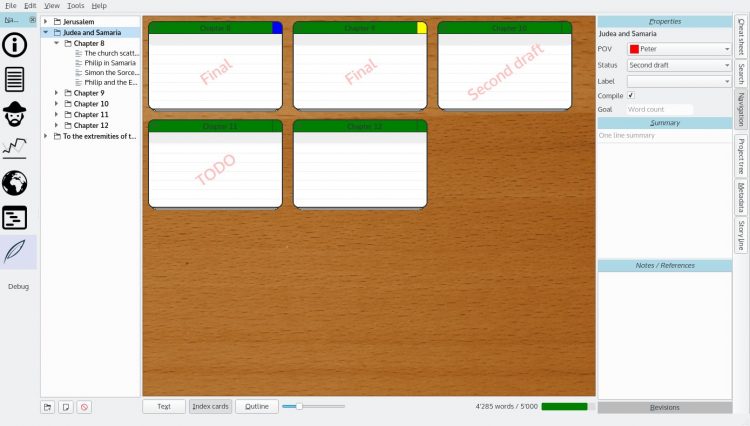 Whether you plan to work on a book, a screenplay, or better structure your dissertation, you’ll probably see apps like Scrivener recommended.

On Linux the choices are somewhat limited.

Scrivener for Linux entered beta back in 2011 has never left it. The port is no longer maintained, though that doesn’t stop some from continuing to use it. Sadly, according to user reports on developer’s Literature & Latte forum, the final Linux beta release (v1.9.01) refuses to run on Ubuntu 16.04 LTS and above.

This was noted by reader Avery J., who mailed in to tell us about a promising alternative:

“As most writers know, the Scrivener for Linux version has been abandoned, and with 16.10 has become unusable.

But there is a *great* new substitute I stumbled on when I was starting my new book. It’s called Manuskript.

Ver. 0.3 is pretty rough, but I cloned the development version and it’s nicer. Still a lot of hiccups though, but the dev took the Scrivener concept and made it better IMHO.”

Avery is right in that Manuskript is far from being the prettiest app! But, honestly, it has a pretty robust feature set hidden beneath its intimidating layout.

Aside from resembling the overall look of Scrivener (have I mentioned Scrivener at all yet?) it has a bunch of similar features, including (but by no-means limited to):

Let us know what you make of the app in the comments below. And if you’re working on, or know of, any similar software that works on Linux, do tell us about it!