On the look out for a clean, modern and open-source desktop RSS reader app for Linux? I know I am, so I was excited to come across Alduin.

Alduin is a simple RSS (and Atom) feed aggregator that’s billed as having an “ergonomic, complete and easy to use interface, which will be suitable for all types of user.”

It doesn’t sync with any web reader services like Feedly (which is my main ask( but does let you add and remove RSS feeds directly in the app.

I know that some of you will be screaming “Liferea” at this post. Don’t get me wrong: I think Liferea is a wonderful client, and it handles RSS feeds nicely.

But since the demise of the fantastic Lightread (a desktop RSS reader that used Google Reader I’ve longed for something with a similar style and layout (not to mention some of the neat social network and web service integrations, as I’m a big Pocket user).

Alduin, though far from perfect, is a pretty decent alternative. 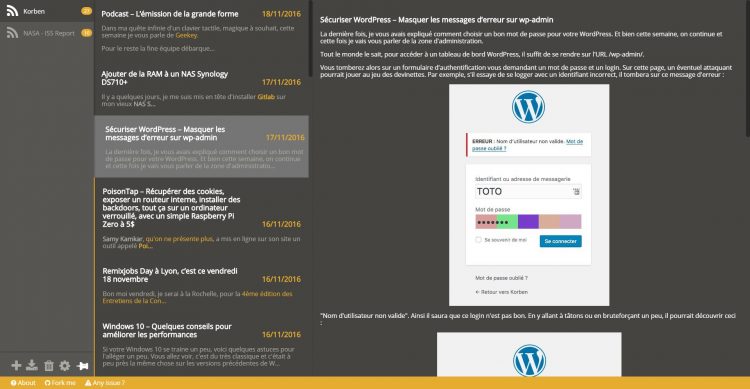 Alduin is an Electron app, meaning it’s built using web technologies rather than native system ones. While this may seem like a drawback you have to remember that this app simply wouldn’t exist without it.

It lets you add (and export) a

It’s (currently) short on system integrations, so you won’t get an unread count on the Unity launcher, see an application indicator, or benefit from native system theming, but it’s a promising first draft.

I look forward to seeing how this app evolves.

The application is yet to see a stable release and, its developers say, ‘is evolving day by day’. That doesn’t meant that you can’t use it now, just keep the cautionary proviso in mind as you do.

You can download Alduin for Windows (32-bit) and Linux (64-bit) from the project’s Github page. There you can also contribute code and file issues.