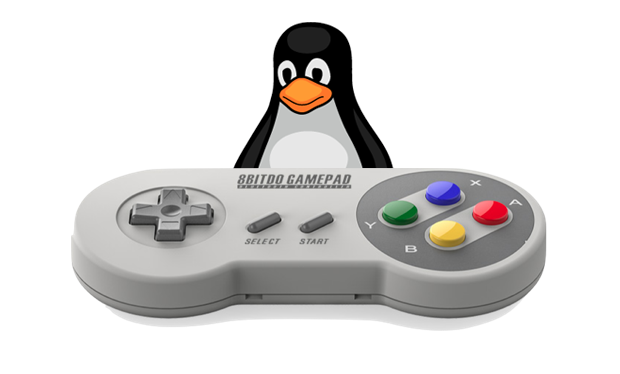 Do you own one of 8Bitdo‘s awesome retro-styled gamepads?

If you do, I’m jealous! Their Nintendo-inspired controllers look awesome and get great reviews, plus they support a wide range of operating systems and games platforms, including those on Linux.

If you own an 8Bitdo controller then you know that the company release firmware updates for their controllers fairly regularly. These updates nix pesky bugs, improve performance and increase the controller’s compatibility.

But (until now) their flashing tools were only available on Windows and Mac OS X. If you were using Linux you were out of luck.

Enter GNOME developer Richard Hughes, who hit the brick blocks to catch us all an awesome power-up: support for upgrading the firmware of wireless 8Bitdo controllers on Linux.

This wasn’t easy; unlike a retro platforming classic where you can just hold right to get to the end Richard had a few obstacles to surmount, including custom file formats and a custom flashing protocol.

But overcome it he has, as Richard explains: “The result of all this is that you can now do fwupd update when the game-pad is plugged in using the USB cable (not just connected via bluetooth) and the firmware will be updated to the latest version. Updates will show in GNOME Software, and the world is one step being closer to being awesome.”

Totally awesome! Great work Richard, and props to 8Bitdo too. Not only are they allowing their firmware to be distributed through LVFS but they also open-sourced their Windows and OS X flashing tools in response to Richard’s efforts.