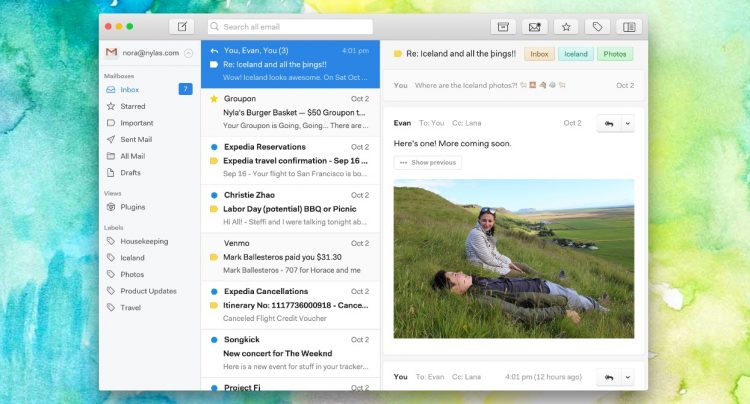 Today a new app launched that will be hoping to join the list above, an app that promises to ‘create new experiences and workflows around email’.

Like a web-browser or modern text editor, N1 is designed to be built on and improved through extensions.

The plugin architecture makes it easy for developers of all skills to add new features, from adding buttons to the composer view to new sidebars or even an entirely new user interface! N1 plugins can be written JavaScript, NodeJS, React, Flux, and Electron.

Not that everyone will want to expand the app; the core app appears to be as fully featured as most will need, and the clean and uncluttered appearance keeps the focus where it needs to be: on the email, not the app. 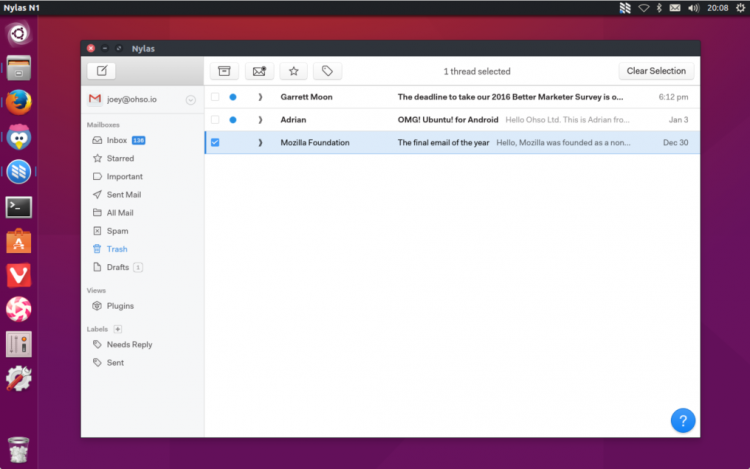 But unlike a traditional desktop email app N1 does not itself directly connect to a web-mail service using  standard IMAP or SMTP protocols.

By default N1 uses the Nylas API and open-source Sync Engine to handle mailsync operations on Nylas’ own cloud infrastructure.

In effect this means that all email you get in the app first passes through  – and is stored on – a Nylas server.

Understandably this is not something everyone will be comfortable with this. Concerned users can roll their own local version of the Sync Engine and API server to use N1 ‘isolated’.

Nylas’ modern APIs and Sync Engine work with a slate of existing email providers. This allows the app – not to mention any other app or tool built on the platform – to forgo, quote, ‘the complexity of working with old protocols like IMAP and MIME’.

The Nylas Sync Engine “[…] abstracts away IMAP, POP, and SMPT to serve your email on any provider through a modern, RESTful API.”

Sounds complicated but, in short, it means developers can create new mail experiences without needing to worry about legacy limitations.

Nylas N1 no longer requires an invite and is available to download directly.

N1 is a cross platform app with binary desktop builds for Mac and Linux (Windows is coming soon). The kicker? The app can currently only be downloaded on an invite-only basis.

With no invite of our own we can’t give you a more thorough overview of the app, its features or how well it runs on Ubuntu – but if you manage to snag a download for yourself (or have the patience to compile it from source) be sure to let us know what you think. 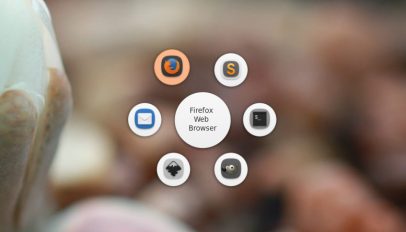 6 Recent Linux App Updates, Including Corebird and SMPlayer
Read Next