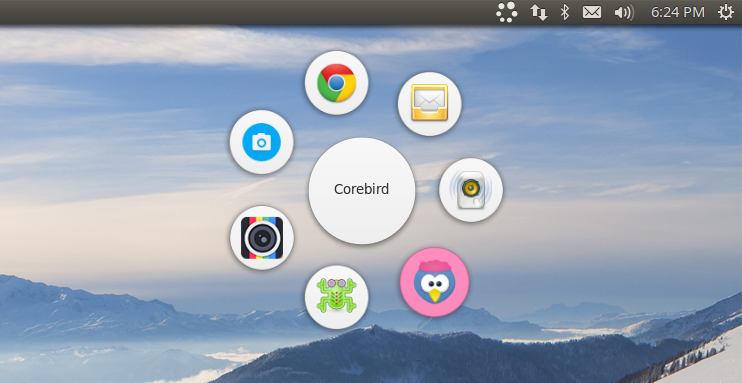 A new version of circular app launcher Gnome Pie is now available, freshly baked with a bunch of bug fixes and seasoned with some new sweet new features.

Among the changes baked inside the unapologetically slick application launcher is support for quarter and half pie shapes, lets you define the maximum number of slices each pie has, and gains both a new theme and new app icon.

The video below shows many of the changes new to this release in action. Scroll down for a recap of the app and details on how to install it in Ubuntu 14.04 LTS and later.

What Is GNOME Pie?

GNOME Pie is an alternative application launcher for the Linux desktop and was inspired by the “OPie radial add-on” for the popular World of Warcraft game series.

It works using customizable keyboard shortcuts (or mouse gestures, compiz bindings, etc) to show an animated circular launcher — called a ‘pie’ — on screen. When a pie open a mouse or keyboard can be used to navigate through the shortcuts — called ‘slices’ —inside.

Although an app launcher first and foremost, GNOME Pie is capable of doing more.

Pies can be used control media playback (with play, pause, next, etc), act as a quick launch for bookmarked folders in the file manager, be used as a session controller (shutdown, log-out, restart, etc) and even as a way to manage windows on screen.

Setup Is Easy As Pie

GNOME Pie is just as delicious to set up as it is to use. A clean settings pane with drag and drop features makes it simple to create, edit and configure Pies and Slices.

You can set up as many Pies and Slices as you like, e.g. one for launching titles in your games library, one for controlling Rhythmbox when music is playing, and another for performing common window actions.

Has all this talk of pies has left you hungry? You can add the official GNOME Pie PPA to serve the app on your Ubuntu 14.04 LTS (or later) desktop.

Open a new Terminal window and punch in the following commands in sequence, entering your user password when prompted to do so:

After installation has completed launch the ‘GNOME Pie’ app from the Unity Dash (or equivalent).

GNOME Pie will start silently in the background. To get things set-up you will want to click the indicator applet it adds to the desktop panel when running. Alternatively, press the default Ctrl-Alt-A key combo to open the default Pie to toy around with its interaction model.

Do you like GNOME Pie? Do you like these new features? Let us know in the space below — it is what it’s there for, after all!

Thanks for the poke, Simon!