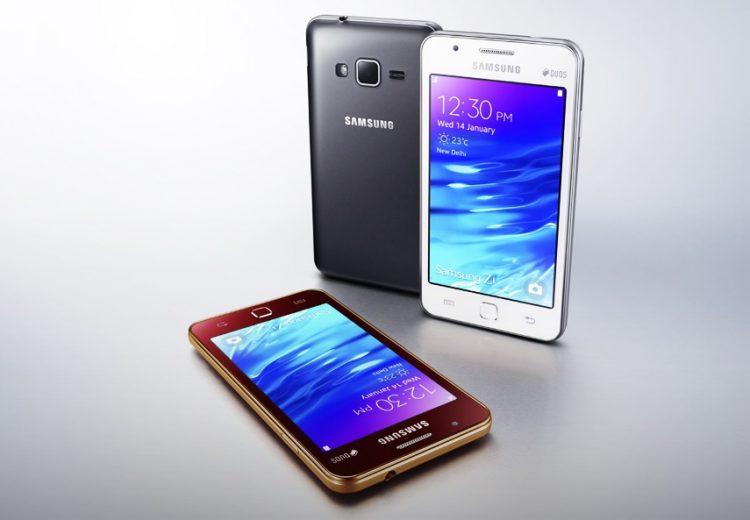 Samsung has announced the release of the world’s first Tizen phone, priced at $90 and on sale exclusively in India.

Having scotched plans to launch a premium flagship handset in Russia last year, Samsung has refocused its Tizen smartphone strategy on accessibility and affordability, choosing to target India first.

And that makes sense.

India is one of the fastest growing smartphone markets in the world, with sales driven at the lower end. Google’s Android One initiative is dominating, Firefox OS is making a splash, and even Jolla has entered the fray with a Snapdeal exclusive.

While most of us are looking forward to the launch of the Ubuntu Phone next month, it’s not the only upstart clamouring to bring fresh ideas and new experiences to our pockets. As on the desktop it’s healthy to stay aware of what else is happening in the Linux ecosystem.

The Samsung Z1 is an entry-level handset. It retails at an affordable Rs5,700 (~$90 US) price tag and the specifications of the phone reflect that:

Some may sneer at the specifications of the Z1, but the Z1 sneers back at them. Tizen is a lightweight Linux OS that requires fewer resources to deliver a comparable experience to other operating systems. Samsung say Tizen boots quickly and runs smoothly on the Z1.

Samsung has also optimised Tizen to suit the needs of Indian consumers.

Web performance, for example, has been enhanced so that pages load fast but use less data. Battery life can be boosted by an ‘Ultra Power Saving Mode’ to ensure that mobile remains mobile and not chained to the nearest power outlet.

Finally, a bunch of added content is offered with the Samsung Z1, including a raft of music and movie content and more than 80 live TV channels available for streaming.

Tizen Can Run Android Apps, Too

As I mentioned in my ‘How Ubuntu Scopes Move Us Beyond Apps’ feature, Tizen is an “app” driven OS that, right now, doesn’t have many native apps of its own.

Samsung isn’t ignoring that fact (at least, not in private). Not mentioned in its press release is a compatibility layer to install Android apps on the Samsung Z1.

The folks at Tizen Experts snagged a hands-on look at how this works, with the runtime layer being installed the first time an Android app is downloaded from the Tizen Store.

Though some see ‘Android layers’ as an act of self-sabotage, removing the incentive for developers to build native apps, it does mean Tizen early adopters won’t miss out on their favourite apps, like WhatsApp, Instagram, and Twitter.

Elsewhere in the Mobile Linux Ecosystem

Tizen isn’t the only Linux-based mobile OS going up against Android and iOS, of course.

The first Ubuntu Phone goes on sale in February, with additional handsets and tablets also expected later in the year.

Although Jolla is busy beavering away on its upcoming crowdfunded tablet it’s not unreasonable to expect a new smartphone, with the original Jolla handset now over a year old — a veritable eon in this market!

Firefox OS, which is already shipping on dozens of handsets in 53 countries, will arrive on more phones as the year progresses. What’s more, as announced as CES, Firefox OS will also be running on all of Panasonic’s new smart TVs (and wearables and washing machines, judging by the video!).

Unveiled at CES, a @Firefox OS TV from Panasonic is on the way — Video: https://t.co/lq2RsBNGDY