Springseed, the simple note-taking app for Linux that features full markdown support, quietly pushed out a new release over the weekend.

The open-source app is currently only available on Linux, offering users a minimalistic UI  for writing, storing and categorising notes, thoughts, code snippets, and more. Notes can be synced between computers using the built-in Dropbox sync, though this isn’t required to use the app.

Version 2.0, the first stable update since February, refreshed the application’s UI with a darker, angular new look. The light colour scheme and custom window frames of version 1.1 have been replaced by a dark sidebar with large typography, native window borders and a boxier, flatter design with colourful accents in the edit window and high contrast icons.

While there is little in the way of new feature additions, save for a word count in the edit mode, there are various improvements to code syntax support and a batch of miscellaneous bug fixes to help improve stability. 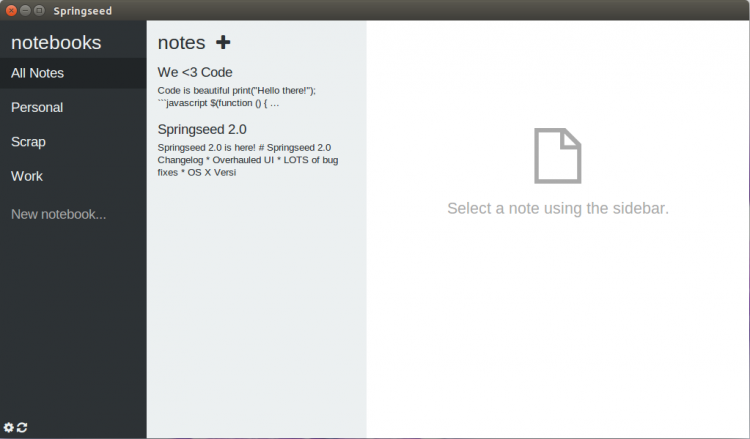 Springseed 2.0 is written in CoffeeScript, and uses Spine.JS and the Atom Shell framework. It’s available as a free download for Ubuntu 13.10 and up using .deb installers provided on the project website.

OstroLk I'd like to have a mac, but i am afraid…
Trim Video Clips on Linux in a Flash with This New GTK App

FPS Well if you want total management of your system, it…
Trim Video Clips on Linux in a Flash with This New GTK App

Chapman Instead of MCata I would suggest Macterial. I'm using this…
The Best GTK Themes