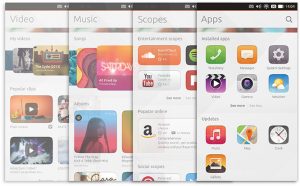 Ubuntu is working to improve support for the development of HTML5 applications on Ubuntu Touch.

The Ubuntu SDK is to enhance its feature set and support for the development of HTML5 applications.

Changes on the way will allow web-based apps to:

In addition to these changes a simplified template for building HTML5 applications will be included, exporting web-based apps to the ‘Click’ package framework is made easier, and installing the Ubuntu Cordova runtime only requires a couple of clicks.

Unlike native Qt/Qml applications all HTML5 applications are rendered using a web-view. At present this is handled by Qt-Webkit, but will shortly transitions to the Chromium-based web view ‘Oxide‘.

By lowering the barrier to entry and ensuring that web apps both look and feel like native apps, Ubuntu Touch gains a boost in its battle for survival.  Not only will decent HTML5 application support broaden the platform’s appeal to a wider berth of developers, but it should also bolster the ever-vital app store catalog so critical to user adoption thanks to the ease of porting.

With Mozilla’s Firefox OS – whose thousands-strong app catalog is entirely HTML5 based – going from strength to strength, including gaining some impressive big name software companies to support it, Ubuntu Touch stands to gain; porting these apps over to Ubuntu Touch should be fairly simple – especially since Firefox OS is already informally supported by Cordova/PhoneGap.

Promising, If Not Preferred

The Apache Cordova project is one of the largest open source effort to support multiple platforms from a single HTML5 and JavaScript-based framework with a consistent set of APIs. Cordova already supports Android, iOS, Windows Phone, and Firefox OS among others, and even Google have been working hard to bring Chrome Apps to iOS and Android via Cordova.

Cordova may not be the preferred or most performant approach to app development but for a fledgling platform like Ubuntu Touch it helps tie together potential, opportunity and reward in a neat, shiny orange bow.