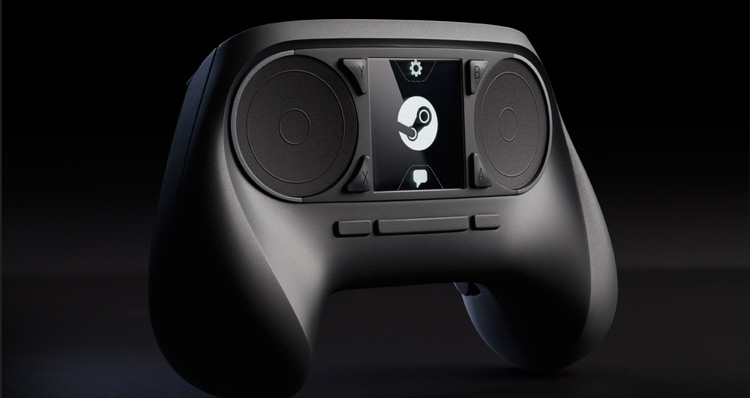 Revered games company Valve have given up the third and final of their ‘universe expanding’ secrets. Say hello to the Steam Controller.

The device features two circular (and clickable) trackpads in place of traditional analogue sticks for greater precision; a touchscreen; and powerful ‘haptic feedback’ that not only offers vibration, but “as a parlour trick” can also function as speakers.

Southpaw gamers rejoice as well. The trackpads and buttons are laid out symmetrically and Valve intend on adding a simple configuration checkbox to switch handedness.

Old releases won’t be left in the dust either. Valve have worked hard to make the Steam Controller compatible with older titles, making use of the centre touch screen to allow “an infinite number of discrete actions to be made available to the player” without having to use a keyboard and mouse.

Valve say the devices should go on sale next year. 300 will be made available for testing before then. These test controllers – included as part of the same beta programme as the Steam OS prototypes – will not feature a centre touchscreen nor will they be wireless.

Today’s news might not come as much of a surprise to longtime Steam fans. Back in January Valve founder Gabe Newell let slip that the company were working on gamepads in a conversation with tech site The Verge.

While Newell stressed that “higher precision and lower latency” were important for gamers’ needs, he also made reference to ‘biometric data’ features being added. These, he explained, would add newer forms of communication bandwidth between the game and the gamer, “especially in ways the player isn’t necessarily conscious of.”

In the same interview Newell predicted that “gaze-tracking will turn out to be super important.”

The Steam Controller isn’t the first time Valve have flirted with new ways of gaming. The company are keen advocates of the Oculus Rift virtual-reality gaming headset, adding support for it to several of their top gaming titles. The company also had a brief dalliance with Augmented Reality technology, though the team working on the ‘Cast AR‘ glasses were let go earlier this year.

Today’s news follows Monday’s reveal of a Linux-based OS tailored for Steam gaming on big screens; and Wednesday’s news that an army of ‘Steam Machine‘ gaming consoles for the living room are currently in development for a 2014 release.

Sam Tran contributed to this article