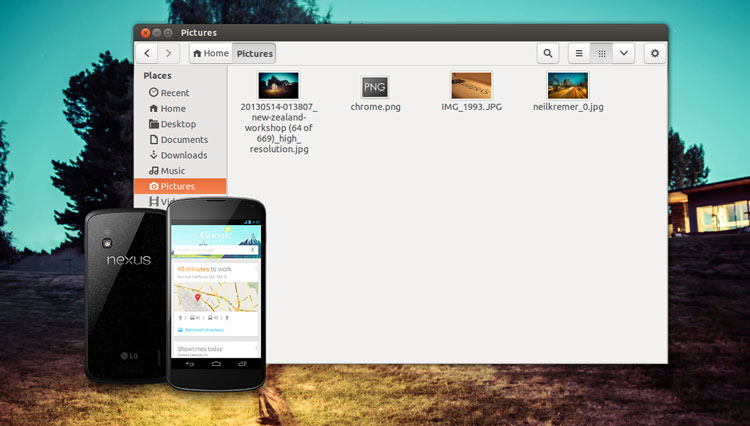 Having trouble trying to mount the Google Nexus 4 on Ubuntu 12.04 or 12.10? Judging by our post-bag over the last few months you wouldn’t be alone.

Like all Nexus models, the Nexus 4 doesn’t come with any form of inbuilt expandable storage. everything saves directly to the flash memory inside.

Linux being Linux there are, of course, a stack of solutions addressing this, letting you access and transfer files between your computer and your Nexus handset with relative ease.

We’re going to look at two them below.

We’ll start with the method suggested by perl-hacker and blogger Sukria. Simply because of the two it is arguably the easiest to follow.

It’s aimed specifically at Ubuntu 12.04 LTS and 12.10, and requires the installation of a backported version of the GVFS – the GNOME Virtual File System – that supports the newer MTP protocol used on Nexus devices.

Using Ubuntu 13.04? The good news is that required packages are already available, so you don’t need to follow this step.

Open a terminal and issue the following two commands:

After installing I’d recommend giving your system a reboot just to make sure everything takes effect. If all has gone well the next time you connect your Nexus you should be able to access it directly in Nautilus.

If the steps above don’t work then all is not lost – reader Manish A. S. mailed us with a comprehensive guide to his preferred solution, telling us:

“I have tried many different methods to mount my Nexus 4 on Ubuntu and none have ever truly worked. Finally after much surfing I found the following to work (thanks to XDA Developers).”

He’s prepped a 9-step guide, available to download by hitting the button below:

And a video* tutorial detailing the process from start to finish:

Home » Video » How To Mount The Google Nexus 4 on Ubuntu