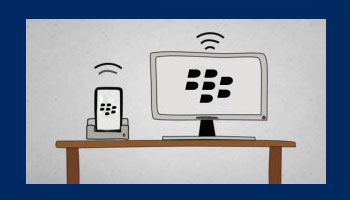 Ubuntu’s goal to run one OS across multiple devices is forward thinking – so much so that it seems other operating systems are now keen to get in on the act.

Blackberry CEO Thorsten Heins, in an interview with ABC, has revealed that the company are investigating ways to power laptops and tablets from a Blackberry-powered smartphone.

If you’re a regular reader of this site, or just generally don’t live under a rock, then this multi device, single-computing concept will be. Canonical, Ubuntu’s financial backers, also have an aim to power tablets, phones, TVs and desktop using a sole OS – Ubuntu. Their goal is to have the same code running on each device, but with its interface automatically adapting to suit the screen-size and form-factor.

Admittedly Canonical/Ubuntu are not the first company to explore the idea of computing convergence. Google, whose Android OS runs on Phones, Tablets and TVs, and possibly soon powering the base of Chrome OS, are exploring their own pseudo-convergent story. But it’s fractured implementation is, perhaps, not as elegant a solution as that proposed by Canonical with Ubuntu.

But do Blackberry stand a chance should they follow a convergent strategy?

“Courage aside, history doesn’t bode well for them.”

While details are scant right now, the company will be providing more details on their plans at Blackberry World in May. But, plucky courage aside, history doesn’t bode well for them.

Motorola gave Android convergence a spin with their dockable-line of Atrix devices (which didn’t take off); and Samsung mooted it with their Galaxy Note II (originally planned to ‘convert’ into a desktop PC when docked). It’s only ASUS, with their bulky PadFone concept, that sits as the sole semi-successful attempt at bringing unified computing to the masses.

Microsoft, with Windows 8, have also attempted to bridge common ground between desktop and tablet computers.

At January’s press unveiling of the Ubuntu Phone I over-heard a discussion concerning Blackberry and Ubuntu Touch. From the snatch I heard it seems that several of Ubuntu Touch’s original designers were subsequently hired by RIM (now known as ‘Blackberry’) to work on Blackberry 10.

If anyone has any more information/pointers on whether this is true I’d love to hear from you. Contact details are at the top.

Jim I kinda agree. You don't have to swoosh the windows…
elementary OS 6 Intros a Simpler Alt Tab Experience

Link_The_Ultimate_Chronomancer Wish I could upvote more than once. I hate it…
elementary OS 6 Intros a Simpler Alt Tab Experience

Link_The_Ultimate_Chronomancer Speak for yourself. I prefer Windows XP's method. I can…
elementary OS 6 Intros a Simpler Alt Tab Experience