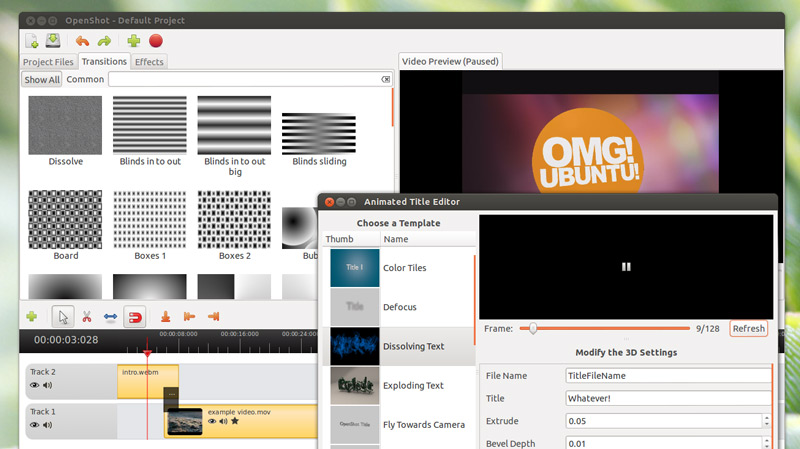 Openshot video editor has premiered its 1.4.3 release – which debuts a number of new features.

Timeline snapping for transitions, improved drag and drop features, and a new dark theme are among the notable new additions.

Not that the traditional post-release Openshot promo video spends much time on these. Instead it’s far more interested in showing off a slew of new Blender-powered title effects:

A new release of OpenShot always piques my interest. But once again I remain a little deflated by the focus on adding dated transitions and effects, as well as titling reliant on Blender. I’d rather see the addition of new and honed features that would help the app stand up against prosumer proprietary editors like iMovie and Final Cut Express.

In fact, when you take away the new effects, Blender-powered 3D effects, and the handful of transitions, this release reads more like a bug-fix release than a major point one.

That’s not to say that OpenShot isn’t a capable video editor – when it’s not crashing it certainly is.

So if all you want to do is throw a few clips together with a few mid-90’s style 3D effects thrown in for variation then OpenShot is perfect.

But for more advanced users, or anyone looking to craft together a short film, Openshot will shows limitations all-too-quickly.

The good news is that Lightworks – a professional video editor used in the editing of many big-budget Hollywood films – is prepping its open-source Linux release for later this month, so one won’t be short of advanced choices for much longer…

This new release is available to install from the OpenShot PPA on Ubuntu 11.04 through 12.10.

Alternatively a .Deb installer for Ubuntu 12.04 and higher can be downloaded by hitting the button below.