For Ubuntu 12.04, 11.10 and 11.04 LibreOffice required an additional packaged to be installed before it could integrate with Ubuntu’s App Menu.

That package, lo-menubar, is surplus to requirements judging by the latest builds of LibreOffice present in Ubuntu 12.10. 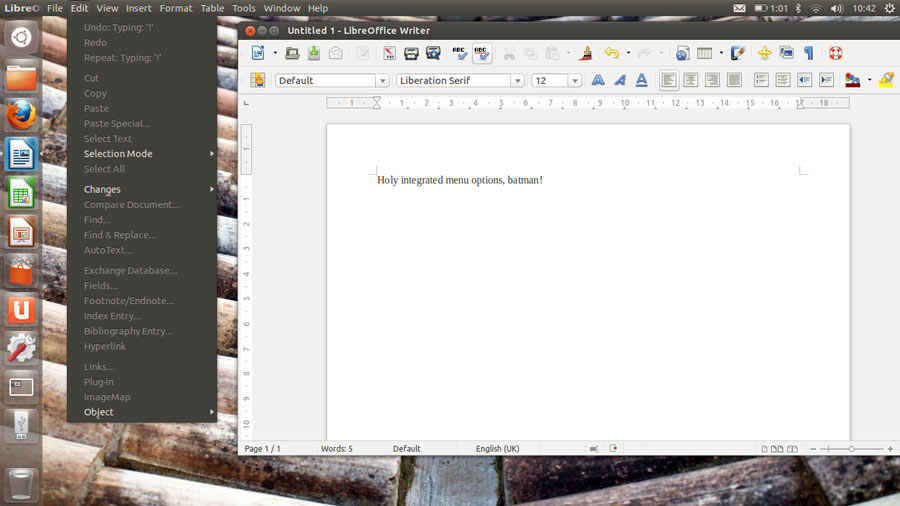 Lo-Menubar – as great as job as it did – was buggy. And it was these bugs that prevented it from ever being included in Ubuntu “out of the box”.

But is this ‘new’ solution better? Based on a quick poke around with it I’d have to say ‘no’.

Switching from LibreOffice to another application and then back again seemed to ‘grey out’ the majority of menu items, despite the fact that they were available before. Even ‘Exit’ was greyed out.

I’m happy to admit that this ‘bug’ may be an issue confined to my set up – and I hope that it is.

Ubuntu added an App Menu for a number of reasons. Chief amongst these at the time was the vertical space it would save for Netbook users.

When Unity transferred over to the desktop version of Ubuntu the App Menu came with it.

But despite the controversy (which mainly centers around the fact that menus are hidden until mouse-over) its introduction gave users a quicker way to access menus.

With LibreOffice joining the convention there are few apps applications left in Ubuntu’s default line-up that don’t work this way.