Mac users can now access and sync their Ubuntu One files straight from the OS X desktop – albeit unofficially.

Mac users have previously only been able to manage their cloud account through the Ubuntu One website.

But with this third-party tool, your Ubuntu One files, folders and music can be ‘synced’ to and from your iMac or Macbook.

Canonical provide official Ubuntu One clients for Windows and Ubuntu users, as well as on-the-go tools for Android and iOS. An official Mac application is in development.

If you have used either of the official Ubuntu One apps for Windows or Ubuntu then you’ll be used to taking advantage of integration with the file-manager.

But working within the dictatorial walls of OS X Ubuntu One for Mac is unable to offer much in the way of integration.

Instead it does one thing and does it admirably: Sync.

Using Ubuntu One Client for Mac

Ubuntu One for Mac runs from the Menu Bar.

Clicking on its icon reveals four options, all of which are self-explanatory.

Once you’re signed in to your account the ‘Account’ pane will display information on the amount of space used and remaining: 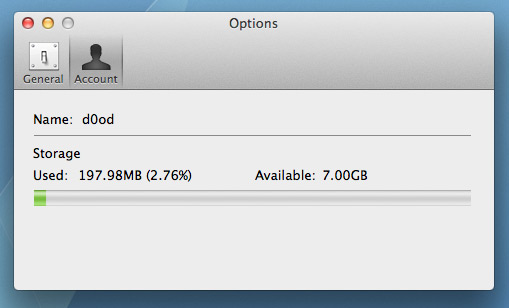 Because the app doesn’t start syncing as soon you login you get the chance to choose where the Ubuntu One folder is placed.

By default it will place it in your Home folder (i.e. ‘/users/username/Ubuntu One‘). To change it head to Preferences > General, click on the location drop-down and hit ‘Select’. 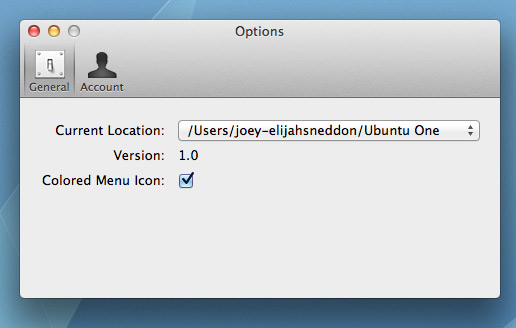 One additional option is also available: a coloured, rather than monochromatic, tray icon:

With your account and location choice set-up all that’s left to do is hit the Ubuntu One icon in the Menu Tray and choose ‘Sync‘ from the menu.

A few things to note when using this app:

Ubuntu One for Mac can be downloaded from the MacUpdate website:

Since writing this post the app has been ‘discontinued’. We’ve made a copy of the app available to download “as is”. No guarantees or technical support is offered by OMG! Ubuntu! for this copy, nor are we actively developing it.

Ubuntu One recently introduced a referrals scheme that offers 20GB of extra space to participants.