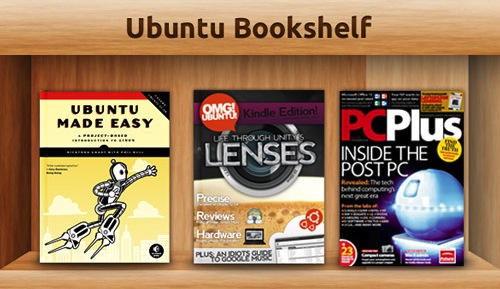 Does the growing number of eBooks, PDFs and magazines on sale in the Ubuntu Software Center annoy you?

I’ve recently begun to ask myself that question, and based on recent comments from readers I am not alone in doing so.

Despite having ‘Software’ in its name, the shelves of Ubuntu’s one-stop app shop are starting to warp under the weight of so much reading material. One could say that the name “Ubuntu Software Center” is no longer an apt description of what is actually on offer.

The emergence of this issue isn’t without precedent. Google’s Android Market saw itself renamed and split off in to distinct sections after an increase in media content.

But what’s the solution for Ubuntu?

Selling eBooks in the Software Center is smart, regardless of whether they neatly fit the criteria laid out by the name.

Everything – apps, books, and more – is grouped in one place, no need to question which app you need to open to find what item.

Plus, it’s not like magazines and eBooks appear in all the results; ebooks and magazines do have their own section in the Ubuntu Software Center.

Like the old saying: ‘Don’t fix what isn’t broke’.

Assuming that there is a ‘fix’ needed, one solution that would instantly solve the question of ‘Is it a Software Center anymore?’ would be to change the name of the app to something more encompassing.

Precisely what to I’m not sure.

“Ubuntu Store” is nice, but not descriptive of what’s inside (e.g. it’s not selling Ubuntu); ‘Ubuntu Center’ is a less contentious name than ‘store’ or ‘market’ but doesn’t carry an explicit connotation of “buying”;  “Ubuntu App and eBook Hub” is rather long-winded…

The third solution – though the most unlikely – is to create a separate ‘Bookstore’ app.

This would house all of the magazines, periodicals, eBooks, PDFs and podcasts, freeing up space in the Software Center, and creating a dedicated market segment to target.

In an ideal world it would offer more than a store-front for purchasing, it would also offer a sync interface for eBooks readers (e.g. Kindle, Nook, and Kobo) as well as Ubuntu One for purchase back-ups.

or even, with the addition of music and video content,

Here’s a rough mock-up of what such an app could look like (I am not an interface designer; this was mocked up purely for illustrative purposes.) 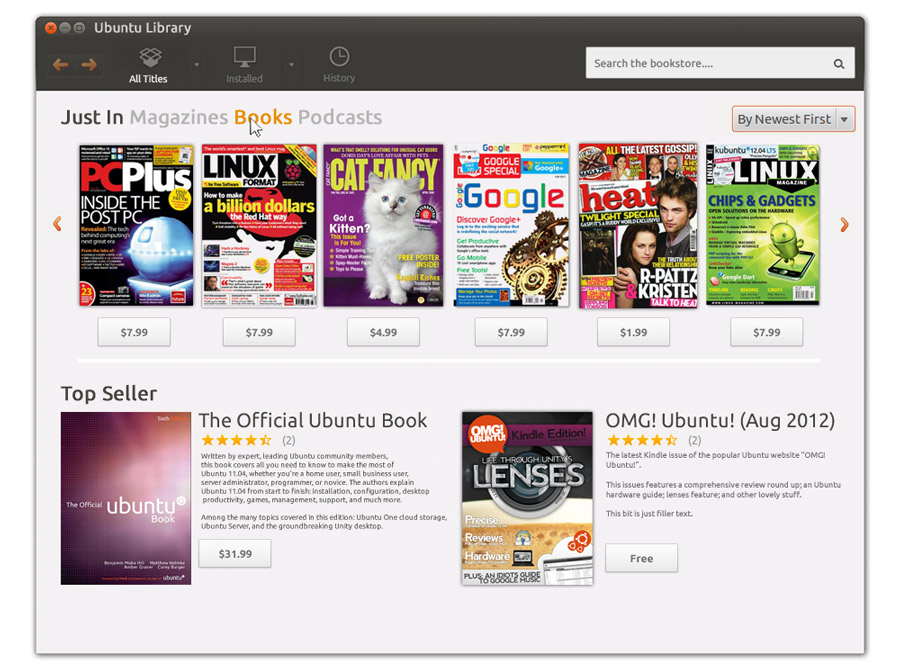 Apple stole a march on Linux with its newly minted ‘Game Center‘ (something Linux could have, and should have, implemented long ago). Linux could claw a point back by pimping a dedicated eBook shop.

As we recently noted in our eBook Creator post: eBooks are no longer a niche category. Last month Amazon reported that sales of Kindle books overtook that of print. This proves that there is a market out there waiting to be served content.

The hard part is in stocking a ‘digital bookstore’ with enough varied content. Right now, despite the glut of magazines and books, the Ubuntu Software Center largely offers technology-orientated titles.

But technology titles alone wouldn’t be enough to sustain an independent app. Ubuntu/Canonical would need to attract a wider range of publishers and authors to make such a venture pay off.

Likewise, there is also the question of quality to answer. Many of the magazines sold on Ubuntu are simply .PDF copies of their respective print versions. Whilst there is not anything wrong with this approach there are better ways for digital content to be provided to users – especially when they’re paying a premium for it.

eBook Creation Tool In Development for Linux
Read Next