From these, three winners were picked by a jury of judges: RSS reader ‘Lightread‘, puzzle game ‘Picsaw‘ and web-app creator ‘Fogger’.

But that’s not where the contest ends. It’s now up to you to decide which apps win the last 3 prizes up for grabs.

To help you get started we’ve listed our top 20 submissions – jury winners omitted – that are worth installing regardless of whether you intend to vote or not.

Note: The following are not presented in any sort of order.

As the name might suggest, XKCD Browser brings the popular online web-comics on to your desktop. 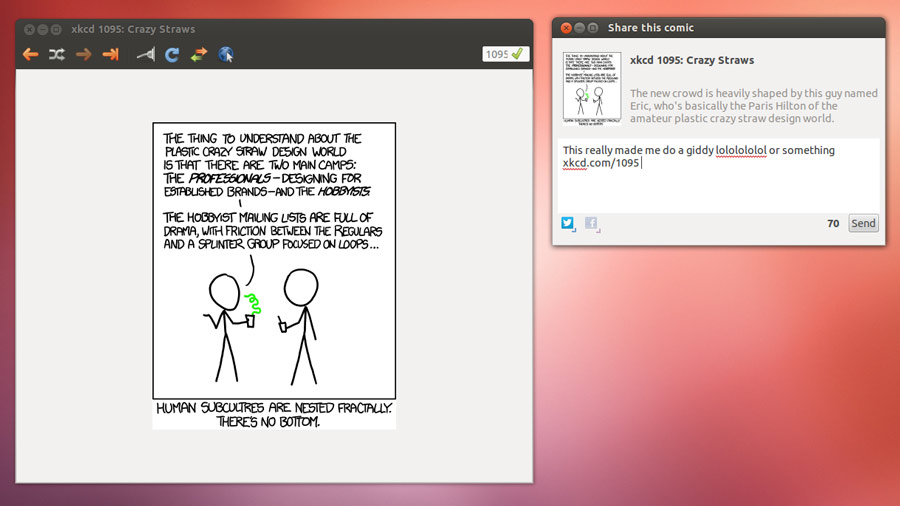 Comics browser are cached for offline-reading; further infromation on the comic can be viewed by hovering over the image, and Gwibber integration lets you share anything funny you come across to Twitter or Facebook with a simple click.

Want to read and reply to SMS messages in Ubuntu? That’s precisely what Showdown entry Blubphone was designed to do. 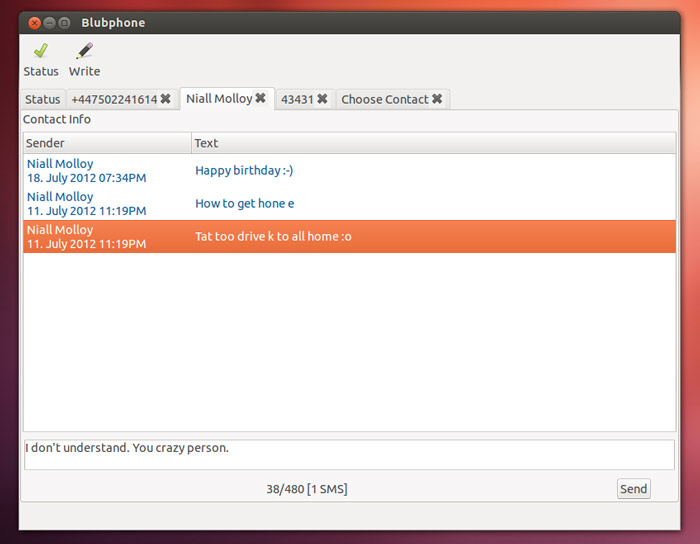 The app needs to be hooked up to your phone before it can do anything. This requires downloading and running the Android version of the app from the Play Store.

Once you’ve got your phone talking to Ubuntu (which only works over Wifi) using Blubphone is straightforward.

It doesn’t list read texts prior to the application running it does display unread messages. You also get access to your contacts book so that you can start a new SMS conversation.

As batch image uploaders go Postman is arguably the slickest. It uses a psedu-literal metaphor for ‘sending’ your photos to Flickr and Ubuntu One; you put photos in the envelope, then attach the ‘stamp’ relating to service you want to send them to.

So far it only supports two services, which makes it less of a batch uploader and more a select one. But the developer does intend to add more destinations in the future.

Cuckoo is a simple alarm scheduler with configurable alarm sounds and Unity integration. 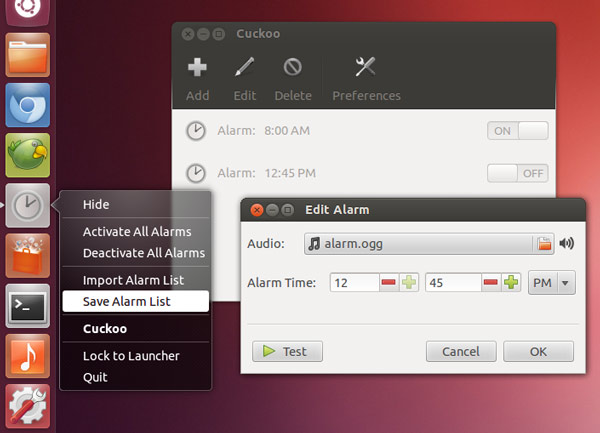 You have some pasta sauce, couscous and a onion in your cupboard. What can you cook using them?

Probably something decidedly unappetizing, but recipe finder app Tastebook will search through an online database of recipes to find something suitable. 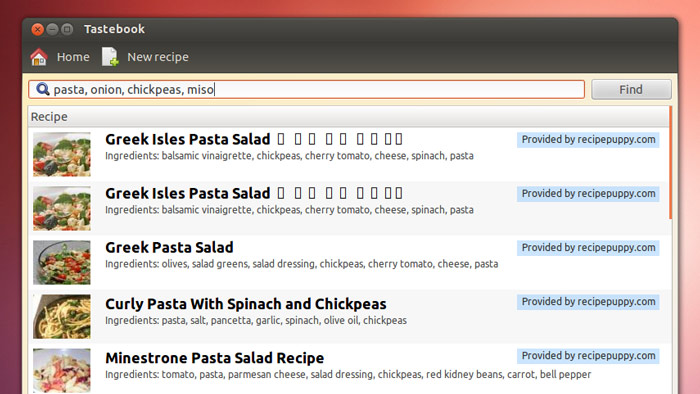 The database it uses isn’t fantastic. Adding ‘vegetarian’, ‘vegan’ or ‘gluten free’ to your search query worksish. But it’s not perfect: I missed the memo declaring chicken broth sutiable for vegans.

Tastebook isn’t just an online fetcher; you can add your own recipies.

Cuttlefish is an ingenious little tool. It allows you to define a set of actions that occur when a certain stimulus is activated.

Okay, it doesn’t sound exciting when worded like that, so here’s an example: you could set up a reflex to deactivate Bluetooth and WiFi when the screen locks; or have Firefox open when you connect to Wifi. You can even set up your wallpaper to change when you plug in a USB device.

The combination of stimulus and resulting reflexes are varied, making Cuttlefish a must-try for Laptop users.

Did you know that Imgur is more than just an image host? It also has a ranking system through which funny or notable images can be ‘rated up’. And the funnier or more poingant the image, the higher it tends to rank.

And its this for which Discvur was made. It provides a desktop-based app for browsing through the latest popular images on Imgur. 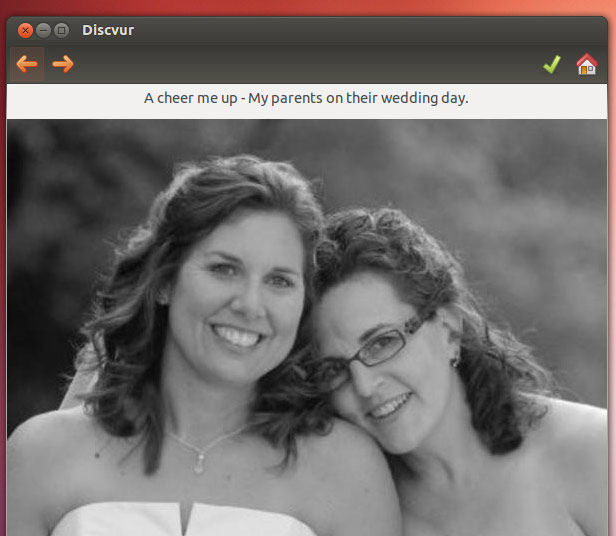 With Ubuntu’s Web App integration and Showdown winner Fogger’s dedicated Facebook app you might question the need for yet another version of Facebook on the desktop. 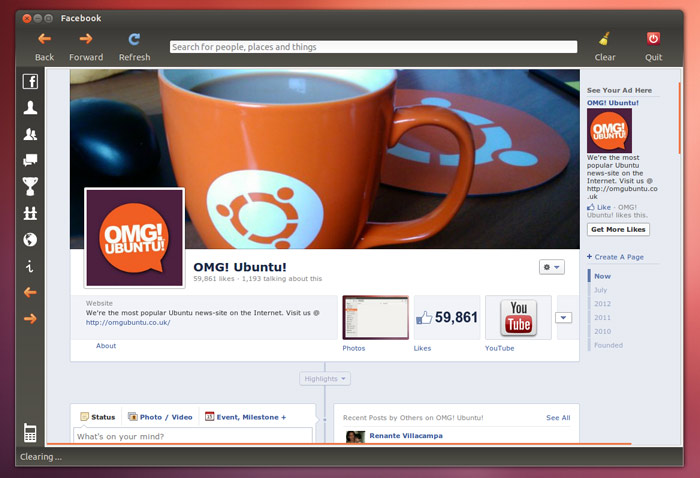 But ‘Desktop App for Facebook’ differentiates itself in all the right places, and feels much more like a desktop app than a web-app dressed up as one.

Amongst the big buttons for easy navigation is a ‘mobile’ toggle. Click this to switch between desktop and mobile Facebook sites.

My Downloads folder is in a perpetual state of untidy so I automate the process of sorting files into the correct folders using an application called DayFolder.

Circle is a an application similar to this, but (sadly) not quite as advanced. That’s not to say it isn’t useful. In fact it has one feature DayFolder doesn’t: it can back up your files to Ubuntu One at the same time as sorting them out.

It’s long been a dream for many to use Google Docs are a full-time office suite. GWOffice brings that dream a step closer.

It’s not perfect (read: ‘glitchy’) and uses some non-native theming conventions. But if InSync (which lets you edit Google Docs locally in LibreOffice) didn’t scratch your itch GWoffice might.

Disorganized? Me too. Every so often I will try to use a calendar or journal planner with the best of intentions… but usually stop using it after a day or two.

MyAgenda probably won’t convert me, but I admire its lack of cruft, bright notifications, alarm support, and straight-forward interface. 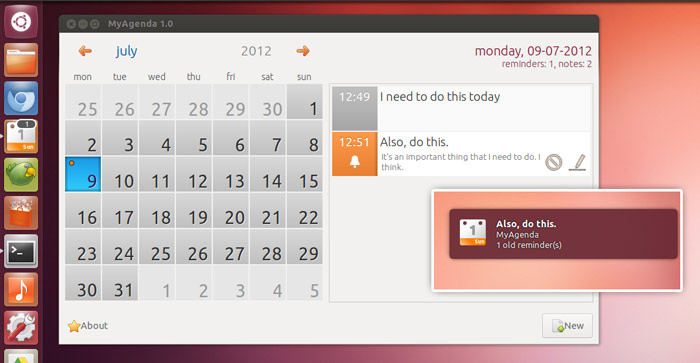 Concentration is an elusive creature, and one quickly untamed by the smallest distraction. To help focus many writers choose to work in “distraction free” text-editors.

UberWriter is one such tool. 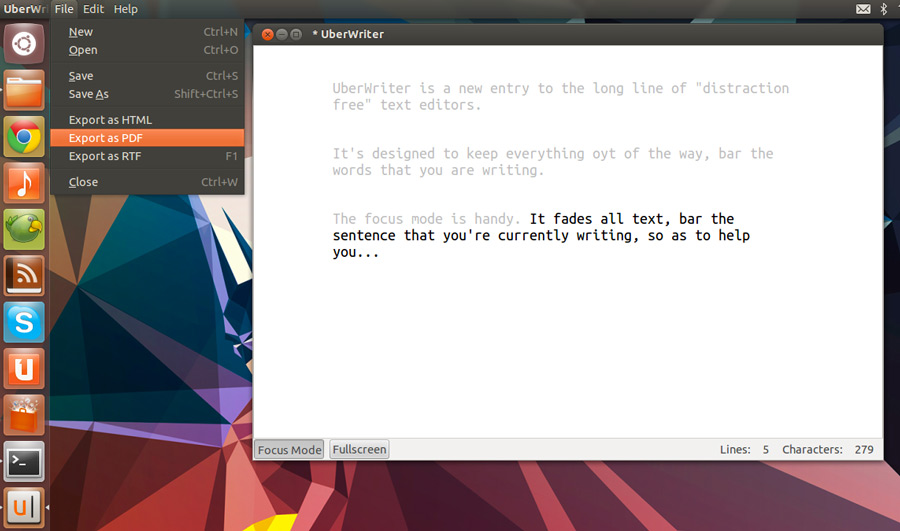 With a native looking interface; full-screen mode; various export options; and a neat ‘focus’ mode, it’s an app well worth trying out if you’re looking to knuckle-down and concentrate on finishing that essay, fan-fic, or love letter to us.

Music players aren’t exactly in short supply on Linux, but those with slick interfaces are (sorry, Audacious!). 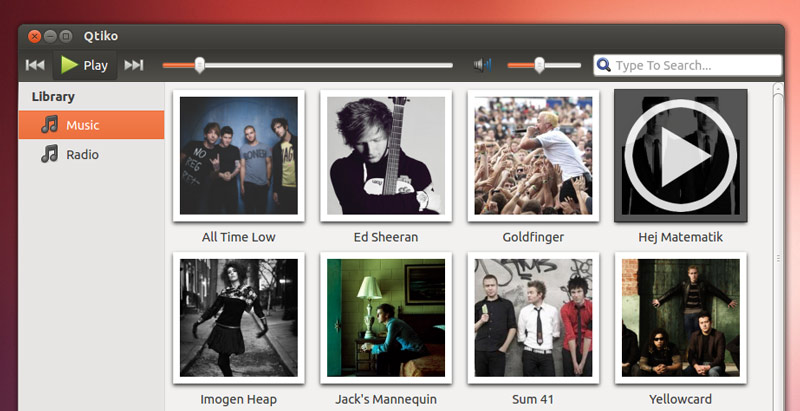 Qtiko packs in a fluid, intuitive look with low resource usage – making it ideal for just about anyone who likes their music to look as good as it sounds.

It’s not perfect by any stretch, especially when you remember it was built 3 weeks. Search doesn’t work, thumbnail finding is a little flaky, and there’s not much in the way of Unity integration.

But if you can overlook these flaws for now then you’ll find yourself with a rather natty new music player.

Lockbox is a digital safe. It allows you to set up an encrypted virtual drive in which you can safely store important files.

The tool guides you through the set-up of a super-secure GPG key; your virtual drive can be as small or as large as you like (tip: don’t make it needlessly large); choose between EXt2,3 and 4 formats; etc.

Once created you “unlock” the box to have it mount like an additional drive. Move your files into it and then eject. Lock your box back up and your files are now stored safely behind a wall of super-tight encryption.

TickIt is a to-do app with a difference. Its design centers around grouping tasks into separate projects – e.g. ‘Shopping’, ‘Work, ‘Personal’, etc. 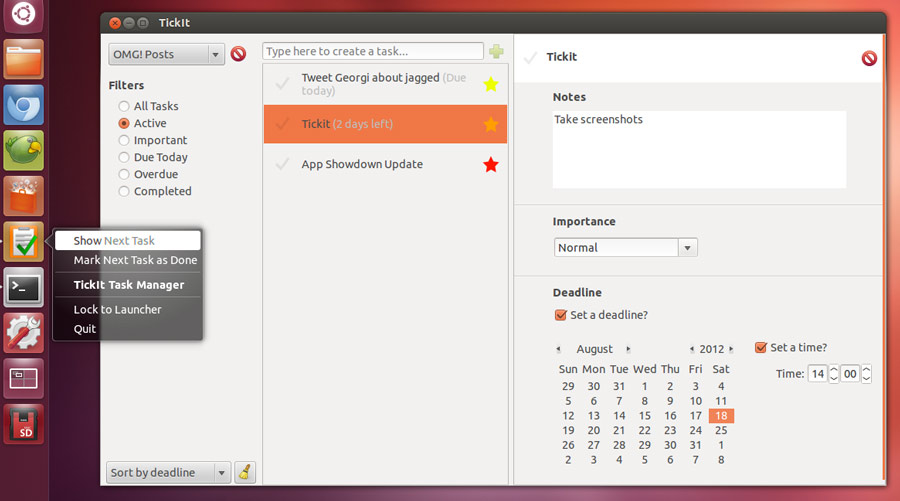 Stocks and shares your thing? Protoborsa is a desktop application for monitoring the financial fortunes of traded companies. 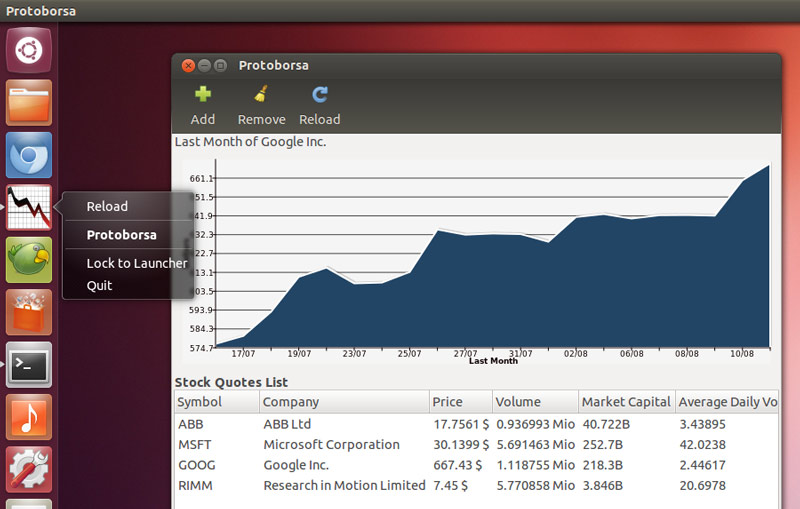 Not every application made for the Showdown has to knock your socks off. Some are just fun.

Spellathon – a simple anagram solver – falls in to this category. It’s a great way to waste a few minutes whilst waiting for a download to finish. 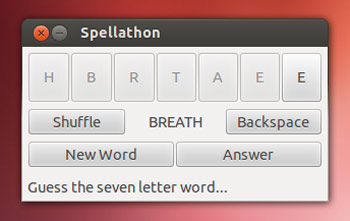 Switz is a ‘digital Swiss army knife’. It’s not pretty, but it is useful.

Amongst its functions are a unit converter; a to-do list; an on-screen ruler, and a system monitor.

You’ll even find a mini-web-browser built in for browsing Wikipedia. 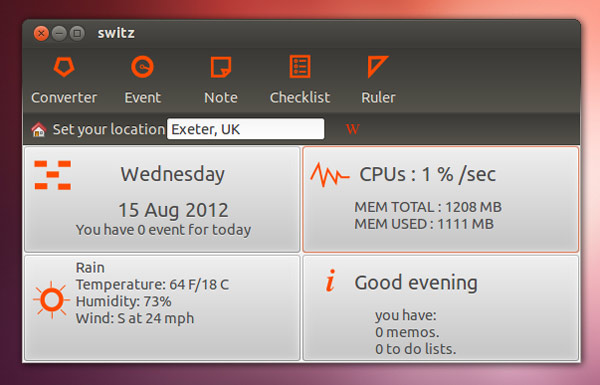 Whether or not the world needs another ‘format converter’ is debatable. But options never hurt – especially when said option is one of the few “all-in-one” converters available.

Format Junkie, despite its over-sized icons, is a capable media converter. It handles music, video, images, .iso and .cso and more. 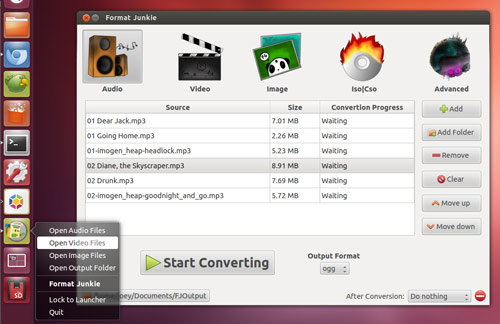 Sharing files over a local network is made easy with Nitroshare. 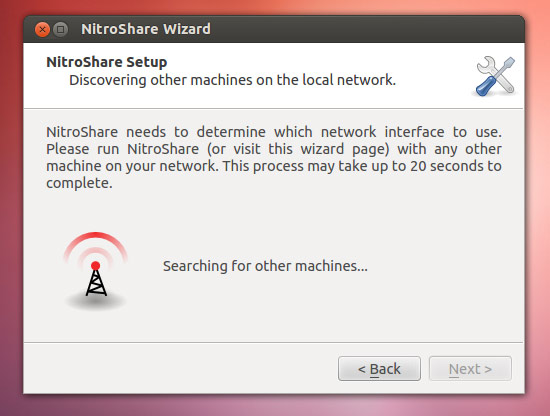 The app, which works on both Windows and Ubuntu, even guides you through set-up so that you’re up and sharing in as little time as possible.

As we mentioned at the out-set these are just a small handful of the applications on offer. The full list of 130+ apps and their install instructions can be found online.

Which apps have you tested so far? Which did we miss that are worth checking out? Sound off in the comments below.