Question: When is a web-app not a web-app? Answer: When it’s created by Fogger.

But where Fogger differs is in how it thinks a web-app should behave.

Rather than solely being a “frame” for a website to sit in, Fogger provides a framework that websites, services and apps can use to “communicate” with the Ubuntu desktop.

It does this by using “userscripts” to relay information from the website back to the desktop.

This means native desktop features, like notification bubbles, Unity launcher badges and progress bars, can be utilised by websites to deliver updates, alerts and information right on the desktop.

And despite the application itself being less than three weeks old it’s already gaining momentum fast.

But all of the verbal noise doesn’t detract from the fact that the site remains one of the most used, most important, and most engaging websites that many Ubuntu users use.

Junaid Lone has created a userscript and userstyle combo for Facebook that, when used with Fogger, turns the website into an almost native-looking and feeling desktop app. 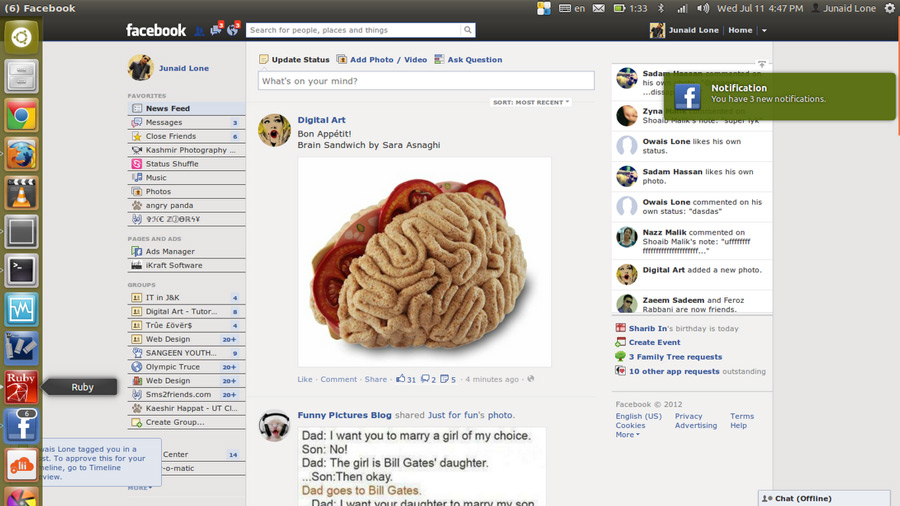 The UserStyle modifies the look of Facebook to help it ‘blend’ in with the default Ambiance theme, resulting in a pseudo-native look. For a first attempt this script isn’t bad, but neither is it flawless.

But the “big sell” of Junaid’s work is his UserScript. With this enabled on a Fogger Facebook app an unread notification and message count appears on the Unity item, and Ubuntu’s default notification system is used to alert you when a new notification arrives.

So this is all great – but how do you go about using userscripts with Fogger?

Open your Fogger app and head to Preferences > Customisation.

Here you’ll find buttons to open the UserScript and UserStyle folders. Place the relevant scripts in each folder, then restart the app for it to begin using them.

Fogger developer Owais Lone tells me that Fogger will support pre-bundled and pre-configured web apps for easy distributed further down the line, which will significantly reduce the amount of complexity required for those wanting to get the most out of their Fogger apps.

As an aside, if you’re going to be downloading Fogger during the App Showdown voting period (i.e. when it appears in the Ubuntu Software Center) make a bookmark of this page now so that you don’t forget.