It was loathed by anyone with a vested interest in liberty, and today is was all-but-killed off forever.

ACTA – the Anti-Counterfeiting Trade Agreement – was dealt a life-threatening blow by the elected representatives of European citizens today.

Showing that democracy doesn’t only benefit the lobbyists with deep pockets, the European Parliament rejected the contentious treaty in a damning 478-to-39 vote.

The result leaves ACTA all but dead – at least in Europe. Other countries – pretty much only America and Morocco – could still ratify the treaty. But even that is looking unlikely. 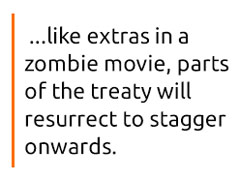 Without the support of the European Union – one of the biggest political and economic powers in the world – and the 27 member states it contains, the treaty would be almost completely and utterly irrelevant.

It’s almost certain that, like extras in a zombie movie, parts of the treaty will resurrect to stagger onwards.

But if people power can see off the mass horde of red-eyed, foam-mouthed corporate interests, they will be more than prepared to deal with any stragglers, too.

Lastly, as many have pointed out, it’s apt that on July 4th, American Independence Day, Europe stood up for its own independence from America and its business interests.

Bravo to all the MEPs who voted against the agreement, and to all those who campaigned, educated and shouted about the danger it posed.