Ever wondered what operating system aliens use? The truth, readers, is out there.

Well ‘out there’ in as far as Carcia, Italy.

It’s here that, over the last few weeks, Ubuntu-shaped impressions have appeared in wheat fields belonging to Joseph Fasciana’s family.

Many of the designs (there are more than one) span between 600 to 800 square meter in size.

So what is causing the grain-groping geometry? UFOs? Aliens? Pranksters?

OMG! HQ is a fair distance from Carica so we can – exclusively – reveal that it wasn’t us (scouts honor).

The Italian Police are also keeping their heads firmly out of the clouds too, and are putting the circles creation down to pranksters influenced by a May edition of paranornal TV show ‘Mystery’ – which happened to explain precisely how to make crop circles…

Joshua and his family are less convinced by this ‘earthly’ explanation however.

“This time of year the wheat [will bend and break] if we walk in the middle,’ he told Italian blog Ctzen.it, ‘There are [no] signs of people who walk, nor wheels of vehicles; nothing that suggests that they were created by a human hand.’

“We have looked carefully, the designs are so perfect that they seem to be made ​​with a compass and the ears are intertwined.” 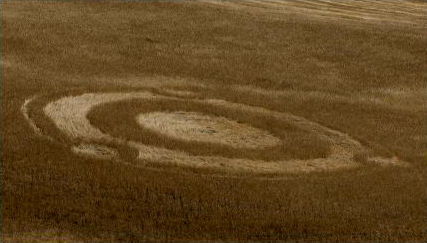 You can see and read more on the shapes at ctzen.it (Italian).