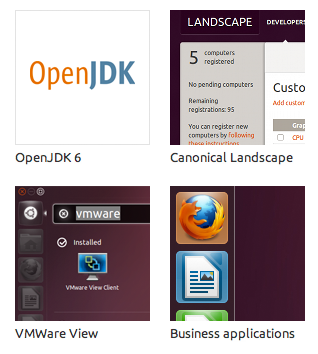 There’s a new Ubuntu spin in town – but this one isn’t for your average Joe.

Based on Ubuntu 11.10, the spin ships with a host of ‘corporate-focused’ software, such as VMware View, Adobe Flash and OpenJDK, by default, whilst removing packages businesses aren’t likely to need, e.g. Gwibber, games, file-sharing apps, etc.

And that is basically it, as Mark Shuttleworth explains:

‘Everything in the remix is available from the standard Software Centre. Packages out, packages in. No secret sauce for customers only; we’re not creating a RHEL, we already have an enterprise-quality release cadence called LTS and we like it just the way it is.

This is a convenience for anyone who wants it. Having a common starting point, or booting straight into a business-oriented image makes it easier for institutional users to evaluate Ubuntu Desktop for their specific needs.’

Download of the remix image requires registration (because of EULAs). For more information head over to ubuntu.com/business/desktop/remix