Like a domino effect of mis-information, this week has been chock full of reports by tech news sites that Ubuntu’s market share is declining, being surpassed by the Ubuntu spin-off and close cousin Linux Mint.

The source of this dramatic revelation is none other than DistroWatch, the site that all Ubuntu haters love to quote, and all Ubuntu lovers love to hate.

Scanning the Internet recently for the word “Ubuntu” points us to a bunch of bogus articles written by the regular offenders (The Register, ZDNet, PCWorld) with damning titles such as “Ubuntu savaged by rivals infected with fondleslab fever” or “Ubuntu shows DistroWatch decline as Mint Soars.” 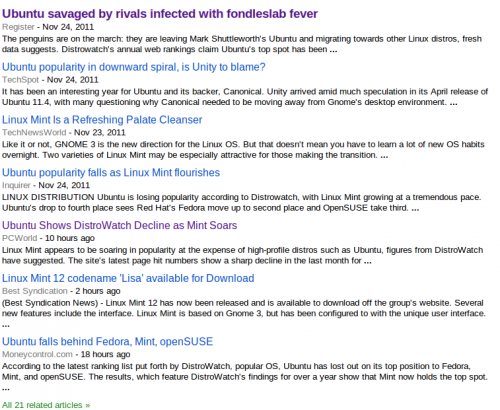 Many of these articles suggest that the backlash over the Unity desktop is to blame, as swarms of Ubuntu users flock to alternatives. This is complete nonsense, and these sites are just attempting to ride the Unity controversy train for another couple of stops for more page hits. Don’t join them.

Seeing as Canonical themselves aren’t pulling any punches (they rarely do) to refute the bogus claims perpetuated by these “tech sites” (which are really just hives of uninformed morons re-posting anything they see on ZDNet with a dramatic title that’s sure to attract a bunch of views, and hence ad clicks), I figured it was time for OMG! Ubuntu! to step in and clear the air with some hard facts.

You know it’s a sad day in tech journalism when we have to take the high ground and tell everyone not to panic. So here goes.

DistroWatch is not an accurate measurement of Linux distribution popularity. In fact it’s not an accurate measurement of anything. The only thing Distrowatch statistics tell you is how vain the fanboys are of any particular distribution. It measures page views to each distributions’s information page. For example, when you visit distrowatch.com/arch, that adds a little bit to Arch’s relative popularity on Distrowatch. (As a side note, I want you to all go ahead and click on that link. Let’s see if we can make Arch the most popular Linux distribution in the world, and as a little treat, we may even get Steven J. Vaughan-Nicols to write an inflammatory article about it).

As a distribution becomes more mainstream like Ubuntu has, the number of views to the Ubuntu DistroWatch page will not increase in proportion to the actual number of users the distribution has. This is simply because regular people using their computer don’t go and visit DistroWatch. In all likelihood, they probably haven’t even heard of DistroWatch. Ubuntu also doesn’t make a conscious effort to direct their user base to the Ubuntu DistroWatch page by posting the link all over their forums, documentation, blogs, press releases, and more.

One of the most hilarious claims is that Ubuntu’s market share has actually been declining ever since Mark Shuttleworth founded it in 2004. And according to this chart, it is. However the (only) important piece of information on this chart is where the numbers come from: DistroWatch. 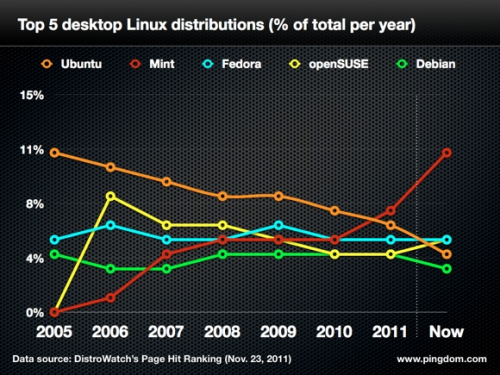 Hopefully you all now agree that DistroWatch is a useless website for quoting relative Linx distribution popularity once they reach mainstream usage.

So how do we see the relative popularity of distributions?

Well, it’s actually pretty difficult. Probably the best idea would be to take a look at the distribution’s page on Facebook. Here you can see that Ubuntu has over 500,000 “fans” whereas Linux Mint has 14,000. Similar trends exist on Google+ or Twitter. Even Google Trends shows Ubuntu clearly ahead.

DistroWatch also publish hits to their home page (distrowatch.com, rather than distrowatch.com/yourdistrohere) which show Ubuntu significantly ahead of other distributions.

You could also ask Google for their Gmail statistics, or google.com, but unfortunately the user agent strings for Linux computers make it quite difficult to easily distinguish between individual distributions.

But at the end of the day, you’re always going to get people posting “damning” graphs and statistics showing that what everyone thought was the most popular distribution actually isn’t, and then your little world gets turned upside down at the thought. It’s not just confined to Linux distributions – we see this all the time with smartphone market share. It’s a common tactic employed by journalists on the web – they use the shock factor to their advantage, hopefully prompting you to share the article with your friends due to the shear revelation and disbelief caused. Pretty graphs simply attempt to add some truth to their claim.

Don’t get me wrong: DistroWatch isn’t at fault here. Nowhere do they claim that their method of measurement is accurate, representative, or useful. The folk at fault are those who abstract out the statistics and pretend that they are in fact an accurate representation of relative market share, misleading their readers.

My advice: Ignore any article that quotes DistroWatch as “fact”. For a general solution, avoid ZDNet and The Register, and your average daily hyperbole intake will be significantly reduced.

Now, can we get on and get some stuff done instead of bickering over useless metrics?

Home » Editorial » Dare To Be Different: Ubuntu’s Popularity Is Not Declining