Though for many users it is likely comforting to know that use of the terminal can be largely, if not entirely avoided with today’s crop of shiny Linux distributions, there are those among the community who love the raw utility of the command-line.

Others still find they need the Linux terminal to effectively accomplish certain tasks.

Applications used to access the Linux terminal from the desktop are known as terminal emulators. For example, the default terminal emulator in Ubuntu’s latest stable release is called Gnome Terminal.

While Gnome Terminal gets the job done (and with an accommodating feature set that is easy to overlook), there are still some areas in which, by nature of its design, it can fall a bit short. That’s okay, though, because the variety of use-cases has lead to a variety of terminal emulators. Which one suits your particular needs?

Tabs are a huge step up over multiple windows, but what if you want to actually see several processes at once? For example, you may need to manipulate some configuration files while at the same time browsing your filesystem or viewing a manpage. 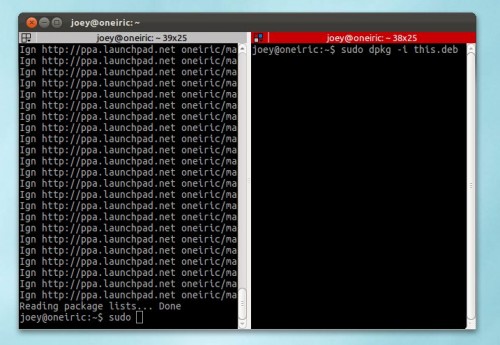 Being a tiled terminal emulator, Terminator is especially great if you have a generous amount of screen real estate and spend any significant amount of time in the terminal. It allows you to split it’s main window into as many tiles anyone could ever need. Thus, one could conceivably get along just fine with only one instance of Terminator opened at a time

Tilda is a configurable “Quake-style” terminal emulator, meaning that it slides down from the top of your desktop when a user-configurable key (default is F1) is pressed.

Simply put, Tilda’s strongsuit is that it stays hidden from view until it is needed, at which point appears conveniently without your needing to search through menus to launch the application. It is especially useful for one-off quick tasks such as installing or removing a package in apt. In fact, though, all of those things can be said about any of the Quake-style apps mentioned here. hat sets Tilda apart is that its set of user-changable preferences allow it the flexibility to be capable of more complex tasks.

Specifically, its size can be configured so that it can be “maximized”, and a scroll bar can be toggled on and off. Also, it looks quite pretty, if you’re into that sort of thing. Its appearance (transparency, orientation, borders, animation[!], etc.) can be tweaked to your liking.

Preferences are available by right-clicking on an instance of Tilda and selecting the Preferences item from the menu that appears.

It is worth mentioning that Tilda hasn’t seen a new release in quite a while.

Guake is similar in functionality to Tilda, but has less “eye-candy”, and is a bit less configurable. That being said, it also has some features that Tilda does not (such as a keyboard shortcut to switch tabs, which many Yakuake fans will be accustomed to).

A handle on the bottom right corner allows click-and-drag resizing, and users can also set the main window height in preferences. The window’s border can’t be removed, which is a bit disappointing, but the scrollbar can be toggled on and off and transparency is adjustable. 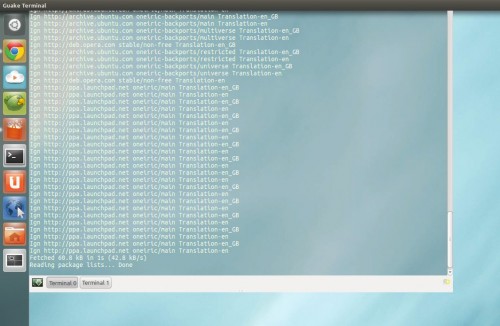 Quake-style terminal app Stjerm seems to be overlooked, perhapse because it is configurable only via command-line or a text file.

That being said, the options stjerm provides are comparable to those of Guake and Tilda. It’s also very lightweight, features tabs, and an option to toggle fullscreen. Keyboard shortcuts for tabs and fullscreen-toggle would be a welcome addition, and their absence will likely be a dealbreaker for some.

Stjerm can be made to launch on startup with any combination of parameters (add it as an item in Startup Preferences), which makes remembering the launch options a non-issue. 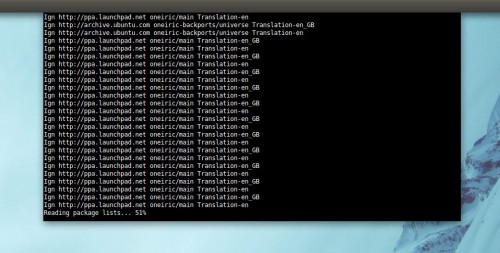 To start Stjerm from Unity and specify the f1 key as the toggle key to hide/display stjerm, you would press alt+f2 and input:

As always, experiment with different preferences to find your own sweet spot.

For those who use Kubuntu or don’t mind using KDE applications, Yakuake is a great option.

In spite of being KDE-native, it seemed quite responsive under Natty on a very modest netbook, and in terms of its featureset and polish, it feels at least as mature as any of the other applications on this list, but has the advantage of currently being developed more actively.

amivaleo Sure. Do you suggest to skip to a photo frame…
gThumb 3.12 Released with HEIF/HEIC & AVIF Image Support

Ravenghast Have you considered looking at the photos instead of the…
gThumb 3.12 Released with HEIF/HEIC & AVIF Image Support

amivaleo I... Use eog. 👀 If it works it doesn't need…
gThumb 3.12 Released with HEIF/HEIC & AVIF Image Support