The biggest change when first running MoonOS, and the one most notable, is the desktop enviroment. MoonOS 4 now used the all-too-familiar GNOME desktop as its base, supplanting the previous default enlightenment shell. 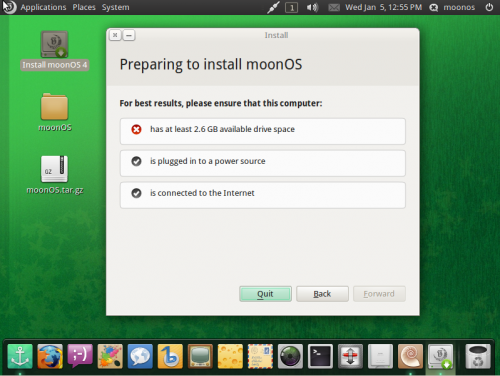 Whilst Gnome is now used as the main default DE both Enlightenment and LXDE spins will be available at a later date.

Standalone, all in one portable OSX-style apps make their debut in MoonOS4. The framework, termed ‘AppShell’, allows users to download a package from anywhere, drop it on a USB drive, dropbox folder or random directory on their computer and run it: no fuss and no installation needed.

Wisened users will likely note similarity between ‘AppShell’ and the ‘Portable Linux Apps’ project we have featured before.

“Now we have our own File Hierarchy System to make more user friendly and modern.”

The quote above is from MoonOS themselves to describe their new, rather unique, file system arrangement. Gone are the abbreviated folders sprawled about the place. Instead, in their place, is this much welcomed simplified change.

It’s the one thing that will be sure to linger in users memories long after ejecting MoonOS’s LiveCD from their system.

Many of the default applications shipped with MoonOS 4 will be familiar to OMG! Ubuntu! readers – you get Docky rather than a traditional bottom panel; Synapse as your easy-to-use launcher and finder; Nautilus-Elementary makes file browser sexy; indicator-workspaces makes switching between workspaces easy; quick view pretty much any file on your system using Gloobus Preview…

The list goes on – and that’s not surprising given the MoonOS 4 .iso weighs in at 800+ MB!

It might run like a dream but does it look like one? That answer is most certainly a yes. The default theme used in MoonOS is particularly striking, bringing a light, airy almost elementary feel to the experience and compliments the wonderfully large Metacity controls with aplomb.

To cut sour for a second I was disappointed with the selection of wallpapers provided. If you’re a fan of green and/or random cities/landmarks snapped at night you’ll be spoilt for choice.

Everyone else should head to our ‘wallpaper’ category and find something nicer.

Currently MoonOS 4 is only available in GNOME flavour for 32bit users.