A lot has changed since we first wrote about CLI Companion three months back – introduction of terminal tabs, a command search box as well as menu bar, bug fixes and other general improvements.

The changes in 1.0, however, are a little bit more drastic.

The first noticeable change concerns the ‘Command List’. This can now be collapsed and expanded at will making for a more compact terminal experience when not in use. 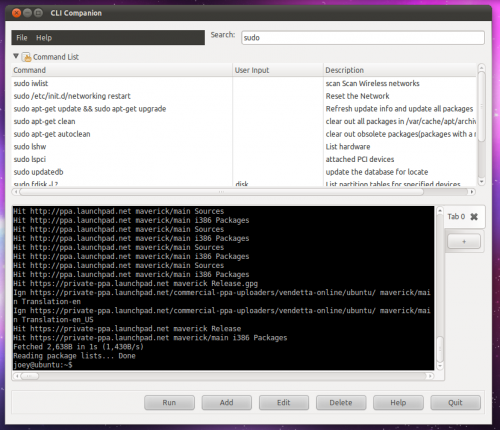 The other big change – which is important if you’re an avid user of CLI Companion – is a change  in the way the application stores and uses commands.

Many found the previously used format limited, in that user input could only be placed at the end of the command.

To address this CLI Companion has introduced a new format that uses question marks – ? – as place holders for ‘User Input’ at runtime.

Developer duanedesign got in touch with us help point out these changes to users who would otherwise be unaware.

“For example in the old format this command could not have been saved in the ‘Command List’:

In the new format you would enter the command into the ‘Add Command’ dialog as:

The most difficult part about the introduction is that any saved commands will need to be transferred manually. “

For more detailed information on the switch over head to http://okiebuntu.homelinux.com/blog/?p=238

The release candidate can be downloaded in .deb format from launchpad.net/clicompanion. Usual caveats apply when installed pre-release software.