GTK app Remmina is to replace TSClient as the default remote desktop client in Ubuntu 11.04.

The tool is a capable successor to tsclient with many great features and support for multiple network protocols – including RDP – all of which is wrapped up in a consistant and accessible interface. 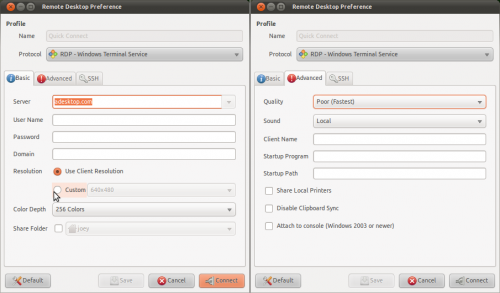 TSClient (Terminal Server Client) will be removed completely having been deemed to be growing long in the tooth. The will to replace it in Natty with a more capable client was expressed at Octobers Ubuntu Developers Summit.

Vinagre was suggested as sole default but its RDP support, which allows graphical connection to computers running Windows, remains in beta and unlikely to be made stable before April 2011 and the release of Ubuntu 11.04

One thing Remmina lacks is an indicator-applet (stop groaning at the back!). As the tool is able to provide a traditional GNOME desktop panel applet  – which won’t be accessible in Ubuntu 11.04 Natty – it would be nice to see functionality for it ported over.

Remmina is available to install in Ubuntu via the Software Centre.

Deditor is a Dedicated python text editor for Ubuntu
Read Next