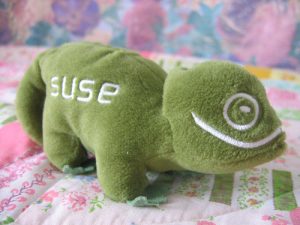 Novell, Inc. – the company behind SUSE Linux, OpenSUSE, Banshee and a raft of other innovations – have announced they are to be acquired by the Attachmate Corporation in a deal worth a estimated $2.2 billion.

Alongside this news, and maybe more significant, Novell also announced that it has entered into a ‘definitive agreement for the concurrent sale of certain intellectual property assets to CPTN Holdings LLC, a consortium of technology companies organized by Microsoft Corporation’ for the princely sum of $450 million.

No word on what those ‘certain properties’ are just yet, but Novell has a wide portfolio of software technologies including various applications based around collaboration in the enterprise.

Novell previously signed a 5 year patent protection deal with Microsoft for SUSE users which, amongst other things, bore fruit for OpenOffice compatibility with Microsoft Office.

Speaking in the press release Novell CEO and president Ron Hovsepian speaks positively about the deal: –

“We… believe the transaction with Attachmate Corporation will deliver important benefits to Novell’s customers, partners and employees by providing opportunities for building on Novell’s brands, innovation and market leadership.”

What the deal will mean for the Linux landscape remains to be seen. The acquisition is certainly no great shock, with Novell the target of many acquisition rumors throughout 2010.