The following idea on creating an  by Daniel Planas was posted to the Ayatana mailing list. I think it’s quite a novel idea so thought I’d share it here.

Calling for ‘intelligent indicators’ Daniel’s idea proposes that the ‘Sound Menu’ panel icon changes to that of ‘headphones’ when, you guessed it, headphones are plugged in. 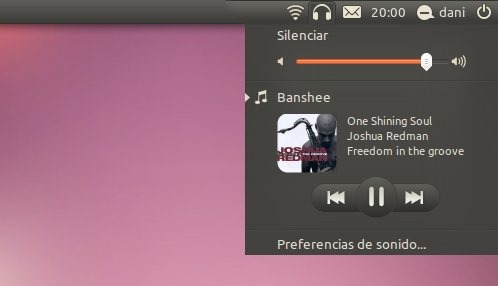 This idea could be taken further. Perhaps plugging in headphone would enable  relevant adaptive ‘sound scheme’; automatically lowering the volume to avoid the inevitable ear-drum-piercing initial loudness switching from speakers to headphones often results in.

Taking this one step further again is an idea I heard during a session at last months UDS. It proposed that laptops could use a built-in microphone to ‘sample’ the  ambient sound of a location and adjust the system sound scheme accordingly:  very noise cafe = louder start up sound, dead quiet library = very faint.

Sadly I don’t think any of these ideas are likely to crop up in Ubuntu anytime soon. Aside from a whole host of hardware issues, calibration, etc. the idea of changing the volume icon to something ‘static’ removes the ability to gauge system volume at a glance.

Help Shotwell to help you
Read Next

VaporX Not if you close it as soon as it starts.…
Canonical Details Plans to Make the Firefox Snap, Snappier