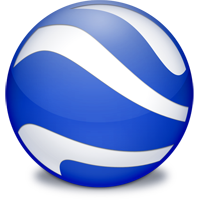 For those of you who follow me on Twitter, you may have noticed a bit of excitement yesterday as I tested out Google Earth on Ubuntu 10.10.

The last time I tried Google Earth on Ubuntu was late last year and I remember that I couldn’t get it working with Compiz effects enabled – OpenGL was slow and flickered so much it was unusable when effects were enabled. When effects were disabled, it wasn’t much better.

Anyway back to the story, I installed Google Earth on Maverick using googleearth-package in the repositories and I was blown away by how awesome it was. So many barriers were in place that have traditionally plagued any form of 3D on Linux – I was running dual monitors, 64 bit, I have an ATI graphics card and I was trying to run Compiz and OpenGL at the same time. 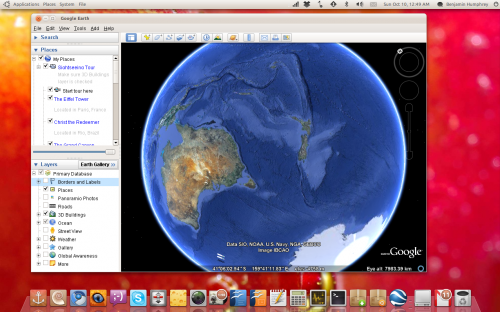 (Sorry if you can’t see that video due to content restrictions in your country, I used some cool New Zealand music.)

Ahh, the sweet smell of progress.

Firstly, remember that I’m running the stock open source radeon driver that comes with Ubuntu 10.10, not ATI/AMD’s proprietary FGLRX driver. I don’t have a computer around with an Nvidia graphics card, so I can’t test it on that sorry.

I found the easiest way to install Google Earth was to use googleearth-package from the repositories. It downloads the latest version from Google and makes a handy .deb for you.

Then simply make the package (–force is so it works for 64 bit):

Once that’s done, install it by double clicking on the .deb it’s generated. Wham, bam, thankyou ma’am – you should now be able to launch Google Earth by hitting up Applications > Internet > Google Earth.

If that method doesn’t work for you, there are a couple of other ways to install Google Earth – by using the Medibuntu repository or simply manually installing it from Google. Both methods are documented here.

Let me know how you get on – I’m interested to know whether Google Earth also works as well under the fglrx drivers, and on Nvidia graphics cards.