With the PiTiVi team keen to ensure solid ‘quality’ releases there will need to be some thorough testing and bug fixing before you find a stable release containing this landing in your laps.

There are oodles of video and audio effects available for use and despite the version i’m reviewing not being a ‘stable release’ I have to say the work Thibault and the PiTiVi guys have done is incredible. Truly.

The wide selection of effects and the ease in which they can be added/used is so simple and user-intuitive it can’t help but stoke your creative fire.

Furthermore you can apply as many effects to a single clip as you wish, although you will need to ‘cut’ a clip into sections if you only want it to affect a specific segment.

Many of the included effects come with their own settings/preferences, accessible directly opposite the main clip/effect browser, offering up fine-tuned control over the manipulation applicable.

To reference the alternative ‘user friendly video editor’ OpenShot for a second, the process for editing/adjusting clip effects in PiTiVi certainly scores one up here. Where OpenShot hides effect preferences behind right-clicks and extra windows PiTiVi puts them slapbang where you can see and access them equalling a usability plus. 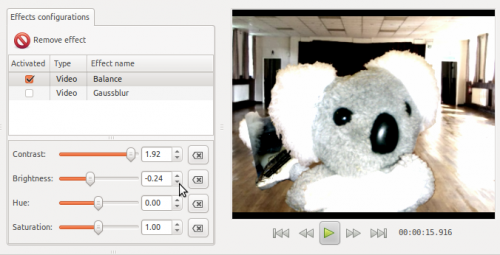 All of this is done in real-time, too: As soon as you drag an effect on a clip it’s instantly applied. This makes workflow irrepressibly speedy; you can see what works and what doesn’t straight away.

One feature I do wish was present already – and it’s relatively minor – is key frame control over effects. Choosing specifically when a chosen effects starts and ends on a given clip would make the implementation of this even greater than it already is.

Having checked out Thibaults work as it progressed over the last few months I am utterly, utterly astounded by the quality, handling &  fantastic interface this has gained in such a short amount of time. It is a absolute credit to the talents of the team behind this – and it’s not even released yet!

Ubuntu 11.04 is, I am sure, going rock out with this lined up in its default application arsenal and all the more awesome it will be because of it.

Whilst the effects work is now in the master PiTiVi branch it is still ‘development’ and not to be considered a stable release. There will be bugs and even stability issues in using this so it is important you are aware of this before proceeding.

Open a Terminal and enter the following commands carefully:

Remember to report any bugs you encounter using the instructions @ pitivi.org/?go=bugs