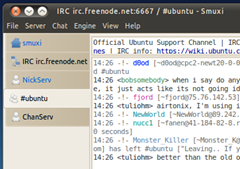 Smuxi IRC client – which impressed us considerably in our previous review – has released a new version packed with updates and fixes.

Full list of fixes n’ features can be gawped at on Smuxi’s roadmap @ smuxi.org/versions/show/12

You know the drill by now: Smuxi has a PPA (Jaunty through Lucid) and you should add and install the IRC client this way to ensure you stay up-to-date with the latest fixes and features.

Open a terminal and paste the following two lines to install Smuxi:-