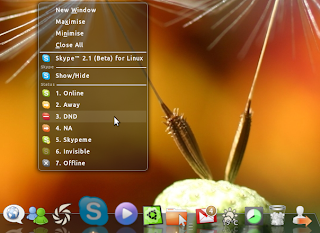 I’ve resisted blogging about Docky’s new docklets and helpers of late because it clearly annoys a vocal minority of readers. Those readers should proceed to find safety as I can keep back my enthusiasm no-longer!

Development surrounding Docky is always so fun, fast & fruitful that it’s hard to hold out on mentioning some of the cool docklets, helpers and changes being developed in Docky itself or proposed for inclusion in it.

One new docklet that has already gone down well with readers is the Timer docklet that we mentioned yesterday. It’s a solid addition so far though chuck in a few pre-defined times via menus& some form of configurable alarm and I’ll love it just that little bit more.

A new Skype helper is rocking up the shop (see top screenshot). This brings simple control of Skype directly to your Dock, allowing you to ditch the over-sized & rather garish tray icon it uses by default and instead change your status and call the app from your dock

Rico Tzschichholz is working on an ace (and oft-requested) desktop switcher docklet. It’s very responsive so far and whilst one isn’t sold on the current design (I find it very wide, although I appreciate that it needs to be) it’s a must-have docklet that I can’t wait to see merged into Docky proper.

Those who have long dreamed of Stacks coming to Docky need, er, dream no longer. Psybers (or Robert Dyer to credit him properly) has confirmed – and is indeed currently working on – adding the ability to view folders on Docky as ‘Stacks’.
Hopefully the design will echo the mighty DanRabbit’s ‘Places’ concept we shared with you many moons ago.
Article originally appeared on omgubuntu.co.uk
App Updates docklet Docky

Guy Clark 1) Install the default GNOME desktop gnome-session 2) Remove all…
10 Things To Do After Installing Ubuntu 21.10